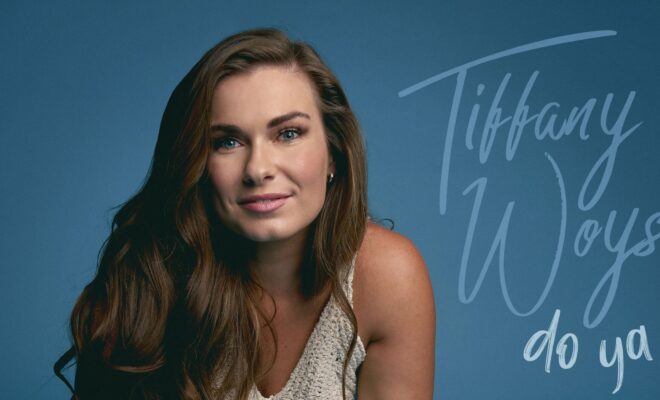 Catching Up with Tiffany Woys

Tiffany Woys has a brand new single “Do Ya” so we just had to catch up with this country cutie!

What is the inspiration behind your new single, “Do Ya?”
“Do Ya” Is a reminder to not let love pass you by and to lead with your heart. It might seem risky, but it’s better to have risked it all for love than to have never known if it could have worked out. Love is something we all need. Love can hurt, but that feeling is a reminder that we are human. We need the human interaction of love. So always go for it. There are no guarantees in life. Always choose love, even if there is an end. I always think of “The Dance” by Garth Brooks. “Our lives are better left to chance. I could have missed the pain, but I’d have to miss the dance.” “Do Ya” is this magical beginning, and you don’t know the ending, but that’s the exciting part! That’s the dance.

Congratulations on your radio hit, “Loved By You!” Has the success surprised you in any way?
Absolutely! My first radio single, “Hostage,” went to #38, and that was shocking, because I had this idea in my head that if you were independent and not signed to a major, your chances at radio were practically zero. So, when I went on radio tour, my intentions were just to meet radio and hope they would get to know me and follow my journey. That way, when my time came, they would hopefully remember me and support me. That day came much sooner than expected, and I am so grateful for country radio. It’s changed my life and given me opportunities I would have never had! I’m so glad that “Loved By You” has had the life it has, because the song means so much to me, even more on a personal level, and to have so many people support the song is a dream come true.

You’re an independent artist and have said you right now do not plan on putting out a full-length LP. What inspired you to do so?
Well, the first easy answer is budget. It’s expensive to make a full album, and since I am independent, that’s a large cost. But, more importantly than that, it’s based on listener behavior. I have noticed that listeners have shorter attention spans when listening to artists they don’t already love and adore. I chose to first release an EP because I thought it was very important for there to be a body of work that someone could listen to and get a good grasp on who I was and what to expect would be coming from me as an artist – in a format not quite as lengthy as an album. Now, when I release one track at a time, it doesn’t leave listeners questioning my direction and sound. However, I do wish to do a full-length album in the future. Being in the studio is a true love for me, and I get so sad when we wrap on a song. It leaves me wanting to get back as soon as possible.

What do you think the future of the music industry looks like?
That’s a great question. I’ve learned to realize that we have no control over the constant changes – and it’s important to learn to “ride the wave.” I mean, just in my short life so far, I have gone from cassette to CD to digital download. Now, people stream more than download. I remember when you needed a label and being independent wasn’t a thing. I remember having to watch TV to see the music videos for the songs I was excited about. Everything will always be evolving. I like to take pieces from all of that and still incorporate it into what I am doing. I still believe in radio. I still believe in music videos. I still believe in record labels, even though I’ve yet to sign with one. However, I take the new and the evolving, and I try and focus on my online presence now, whether that’s social media or music-based outlets. I sure hope our current climate doesn’t change live shows forever, though. Concerts are the heartbeat of country music. In my opinion, getting to connect with your audience in person is far more valuable than streams. There’s nothing like in-person.

When did you realize country music was your calling?
Very early on. I believe I was 6 or 7. I knew music was my thing since I was 5, when I became obsessed with Celine Dion. But, I vividly remember LeAnn Rimes singing the National Anthem for a football game when I was 7. I made my mom take me to Tower Records, and I bought the cassette with the national anthem on it. I played it over and over. Then I started to mimic it. There was something in her tone. Something in her voice. So then I went down her rabbit hole. From there was Faith, Martina and Jo Dee Messina. I never turned back.

Once this craziness is over, do you have a dream venue to play?
Playing anywhere would be amazing right about now, but if I get to shoot for the stars, then I’ve always said something Disney-related. I also am striving toward the infamous Grand Ole Opry for a debut!!! Hey, you said dream.

What have you been listening to, reading, and watching during quarantine?
I guess the question is what haven’t I been watching or listening to?! Haha! I’ve seen virtually every show, and I also watch A LOT of YouTube. Music is in my life every day, but there is never anything particular. My love for music ranges far into every genre. Now that football is back, I pretty much watch that, thanks to my boyfriend. We also got sucked into that 90 Day Fiancé thing, which once you see it, you can’t unsee it.

Most importantly though: What have you been cooking during quarantine?
A little bit of everything! I still belong to HelloFresh, which I LOVE. It always gives me variety. One of the things I love most about HelloFresh is that it gives you recipe ideas, and then you can make the dishes later and put your own twist on them! It’s been such a lifesaver over the past few months, since it allows us to avoid the grocery store (if need be) and still eat healthy! But, there is nothing wrong with good ol’ fashioned pancakes on a Saturday or Sunday morning.