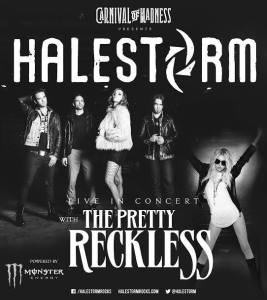 Halestorm and The Pretty Reckless! The Carnival heads out in April and this year their two top bands showcase some of the best and boldest of female hard-rock talent. Halestorm, fronted by sex-bomb rock goddess Lzzy Hale, is set to drop their new album at the beginning of April, so no doubt the tour will see them perform so of their newest tunes (like their current single “Apocalyptic“) as well as older favorites. The Pretty Reckless is fronted by good-girl-gone-bad Taylor Momsen, who previously played Jenny Humphrey on Gossip Girl (and Cindy Lou Who in The Grinch live action movie, but pretend I didn’t mention that). Previous headliners of Carnival of Madness include other powerful female singers such as Evanescence with powerhouse Amy Lee, and guy-led bands such as Shinedown and Theory of a Deadman. This will be Halestorm’s second round with the Carnival, but their first as the headliner.