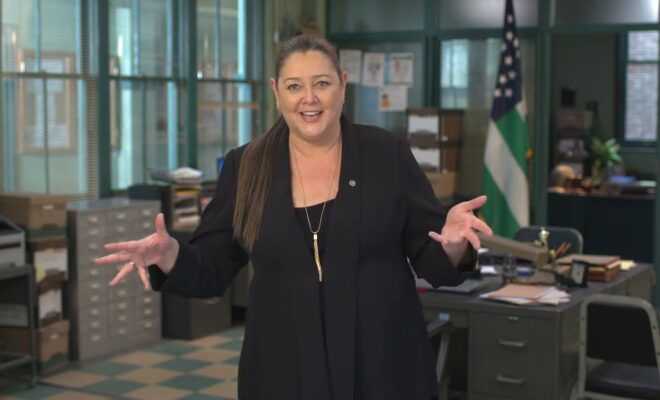 While Season 21 of the original flagship show is returning a decade later, she is a new character this time. She previously guest-starred on the show in the 90s and 2000s as three different characters and now has Lieutenant Dixon. When she joined the franchise as a star of the show, it also came with a new friendship, SVU leader Hargitay, who portrays Olivia Benson on the show.

Camryn Manheim said that befriending Hargitay has been “one of the most special things that has happened to me since I joined the cast
of Law & Order.”

“Mariska invited me over to her house and served me a glamorous meal of Shake Shack,” she recalled. “We hung out with her family and she welcomed me aboard. As I was there she texted and called somebody fancy and said ‘Cam and I are friends and I want to do a crossover and I want to be friends on the show with her. I’m so excited about that.'”

Camryn Manheim On Being a Longtime ‘Law & Order’ Fan

To be honest, I’ve been watching Law & Order since it premiered in the 90s. I think I was just getting out of graduate school. It was the only show in town and everyone wanted to be on it.”

The show became a goal for many up-and-coming and even established actors. Camryn Manheim was able to guest start on it doing different things each time.

“In fact, I was off doing off-broadway theater and everyone would be so excited when they got cast on Law & Order. My very first television show was Law & Order. I remember the play I did directly afterwards, I got to list my credits. At the very bottom of my bio I said I’d been on Law & Order.”

30 years after her last appearance she is back on the show as a series regular.

“It’s kind of emotional and kind of incredible. I started here, I’m back on a show that all New York actors love. It is so beloved in this town and it brought this town back to life really. It has a very special place in my heart and to be standing here in this squad room with my name on the door means more to me than I can actually express,” Camryn Manheim concluded.

Watch the full interview, below.

← Previous Story Chris Young Reacts To Being The Most Nominated Artist At The 2022 ACM Awards: VIDEO
Next Story → ‘Law & Order: SVU’ Star Mariska Hargitay Speaks Out About ‘Law & Order’ Revival