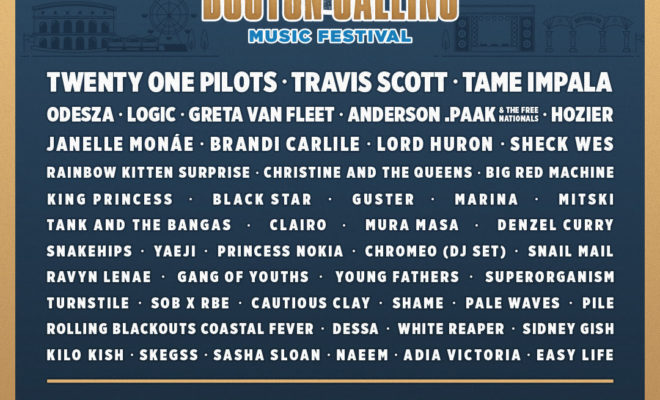 Celebrating their tenth annual festival this year, Boston Calling unveils a lineup of epic proportions – from music to comedy to dance. The internationally acclaimed and locally grown music festival takes place Memorial Day weekend, May 24 – 26, 2019 at the Harvard Athletic Complex in Allston, MA (65 North Harvard Street, Boston). Headlined by Twenty One Pilots, Travis Scott, and Tame Impala, Boston Calling 2019 will present more than 55 performances from musicians, bands, and comedians across its four stages. This year, the festival’s indoor arena will also showcase an all-star lineup of comedy, headlined by Michael Che, Jenny Slate, and Fred Armisen. Overall, the lineup boasts seven 2019 Grammy nominees including Anderson .Paak, Janelle Monáe, and Brandi Carlile, who is nominated for six awards. In a unique collaboration, the festival will also bring Boston Ballet, one of the world’s most renowned dance companies, to the festival.

“Since 2013, we’ve had the privilege of bringing fans nine editions of Boston Calling, featuring hundreds of acts: from world-renowned superstars, to Grammy winners and nominees, to local artists on the rise. We love the artists that have been assembled for 2019, and look forward to welcoming back many of our favorites from past editions. With each Boston Calling, we aim to bring the festival to greater heights and this year is no exception,” said Boston Calling Events, LLC (BCE), Co-founder and Chief Executive Officer Brian Appel.

Each year, the festival crafts a lineup that celebrates both heavy hitters and breakout stars from the Boston area. This year, local and regional acts include Boston’s own alt-rock favorites Guster; indie-rock band Pile; 2018 Boston Music Awards Pop Artist of the Year, Clairo from Carlisle, MA; and up-and-coming singer-songwriter and current student at Northeastern University, Sidney Gish.

Tickets: Three-Day General Admission, VIP and Platinum VIP Passes are on sale TODAY, January 10, 2019, at 10:00am EST at www.bostoncalling.com.

General Admission Three-Day Passes are available for $249; these tickets offer access to more than 55 acts across four stages, admission to all comedy and entertainment in the arena, access to dozens of food vendors, a wide selection of craft beer and wine offerings, an array of fun outdoor games and attractions, sponsor exhibits, and more surprises to be announced. After ANNOUNCE DAY General Admission three-day passes sell out, TIER 1 General Admission three-day tickets will become available immediately for $264 plus fees. Prices will increase slightly as each tier level sells out.

Platinum VIP Three-Day Passes are available for $1099; these offer all VIP amenities plus access to a Platinum viewing experience featuring incredible elevated views of the two main stages, a premium food & beverage package that includes a full specially priced bar featuring beer, wine and craft cocktails; complimentary daily gourmet bites throughout the day and complimentary soft drinks, water and other non-alcoholic options; a complimentary on-site parking pass for each day (one pass per transaction) and access to the exclusive gifting suite, featuring complimentary festival and partner merchandise exclusively available to platinum attendees each day. After ANNOUNCE DAY Platinum VIP three-day passes sell out, regular Tier 1 Platinum VIP three-day tickets will become available immediately for $1,129 plus fees. Prices will increase slightly as each tier level sells out.

← Previous Story Sam Smith and Normani Debut Their Epic Collaboration “Dancing With A Stranger”
Next Story → PREMIERE: Nick Wayne Behind The Scenes of ‘How Do I Get Close’