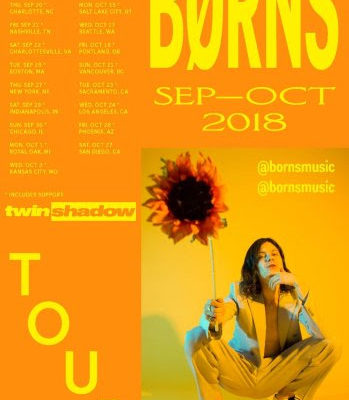 BØRNS has announced his fall 2018 North American headline tour. Fans who are signed up to his email list will have first access to purchase tickets tomorrow, May 1st HERE. American Express and Spotify pre-sales start at 9am PST/Noon EST on Wednesday May 2nd. General public on sale starts on Friday, May 4th at 10am local time. For ticket on-sale information visit www.bornsmusic.com/tour

Fresh off performing at Coachella this month BØRNS has a handful of additional festivals – Common Ground, Lollapalooza, Osheaga to name a few – this summer before embarking on a fall headline tour which kicks off September 17th in Orlando, FL at Beacham Theatre. These dates will feature selections from his debut album Dopamine as well as material from his current album Blue Madonna. Borns will be joined by special guest Twin Shadow, the recording project of George Lewis Jr. Fresh off the release of his new album Caer via Warner Bros., Twin Shadow is currently finishing a tour that sees Lewis Jr. playing sold out headlining shows as well as supporting Beck on selected dates

BØRNS has partnered with PLUS1 so that $1 from every ticket will go to support organizations working towards a cleaner environment through research, awareness, and advocacy. www.plus1.org