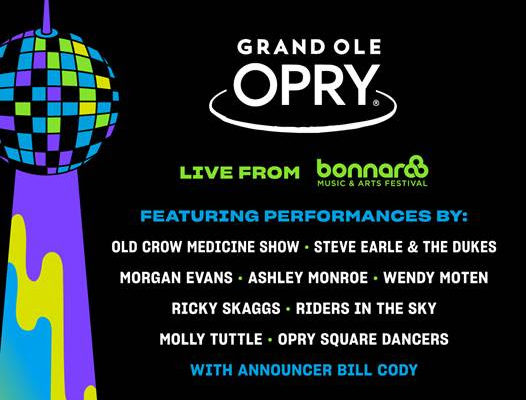 The Grand Ole Opry will be returning to the 2019 Bonnaroo Music and Arts Festival. The one-of-a-kind show will celebrate Bonnaroo’s very special connection with its home state of Tennessee. The 18th annual four-day multi-stage camping festival will take place June 13 – 16, held as always at Great Stage Park, located just 60 miles southeast of Nashville in Manchester, TN.

The show will also be broadcast live via opry.com and wsmonline.com, Opry and WSM mobile apps, and the show’s flagship home, Nashville’s 650 AM-WSM.

“The Opry’s inaugural trip to Bonnaroo last year was nothing short of amazing,” says Sally Williams, Senior Vice President of Programming and Artist Relations for Opry Entertainment Group. “All of us fortunate enough to be part of that performance loved watching some of the world’s biggest music fans connect with the Opry, many for the first time. It definitely was one of the highlights of 2018, and when we look at the line-up of artists who have signed on for next month’s show, we have no doubt that performance is going to be just as memorable.”

The Grand Ole Opry has rarely in its 93-year history taken its iconic show outside Music City, on those occasions visiting prestigious venues such as New York City’s Carnegie Hall and Washington, D.C.’s Kennedy Center. GRAND OLE OPRY AT BONNAROO is just one of the several ways the 2019 festival will be celebrating its host community of nearly two decades. The upcoming event will see Bonnaroo partnering with Nashville Convention & Visitors Corp and the local maker space Fort Houston to create The Ville (formerly The Grind). Located at Plaza 7, The Ville will feature local food, art and more, including Third Man Records, 8th & Roast Coffee, and Project 615. Additional Nashville-based offerings also include Farm to Taco Nashville and the legendary Prince’s Hot Chicken, known worldwide as the original gold standard in hot chicken.

← Previous Story House of Vans – 2019 House Parties Announced!
Next Story → The Bold Type Cast Gets Surprised With The News That The Show Is Getting Picked Up For a Fourth Season!