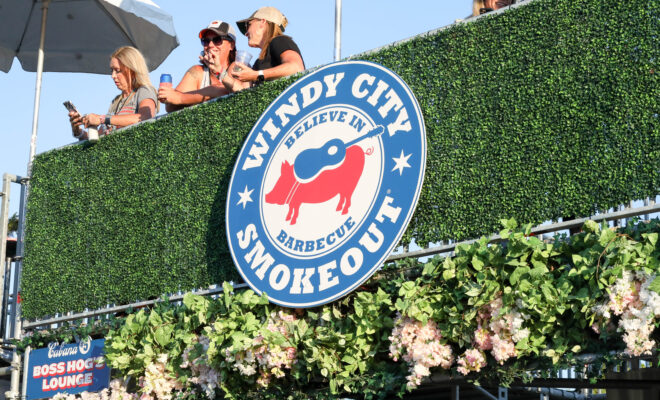 Windy City Smokeout is back and better than ever!

The hybrid festival was the first major music festival to take place in the city of Chicago in two years. Between July 7-11, thousands of fans safely flocked to the United Center’s parking lot for four days of country music, mouth-watering BBQ, and beer.

This year’s lineup included headliners like Brett Eldredge, Darius Rucker, Dierks Bentley, and Jon Pardi. The spirits were high as people once again got to experience live music on a grand scale. Fans and artists alike were feeling emotional returning to somewhat normal life. Morgan Evans told the crowd that this was his first major show back since the pandemic hit. Meanwhile, Ryan Hurd performed new music live for the first time.

In order to gain quicker access to the festival, fans had to download the CLEAR mobile app. This acted as a passport to prove your status. For admittance, fans had to either be vaccinated or have a negative PCR or rapid test within 72 hours of the event.

Signing up was a breeze. After downloading the CLEAR app, users scan their driver’s license before scanning their vaccination card. If the user had a negative test, they were then directed to another page to fill out the information. It also took a photo of the user to put in your Health Pass. Finally, every day of the festival, fans had to fill out a brief health questionnaire.

Once arriving on festival grounds, guests showed the passport screen to at least two workers who then let you go through the typical bag check area.  After scanning your driver’s license for guests over the legal drinking age, you were admitted onto the Windy City Smokeout grounds.

For those who did not download the app, workers inspected their vaccination card or test results. They were then asked to fill out the brief daily questionnaire about their health.