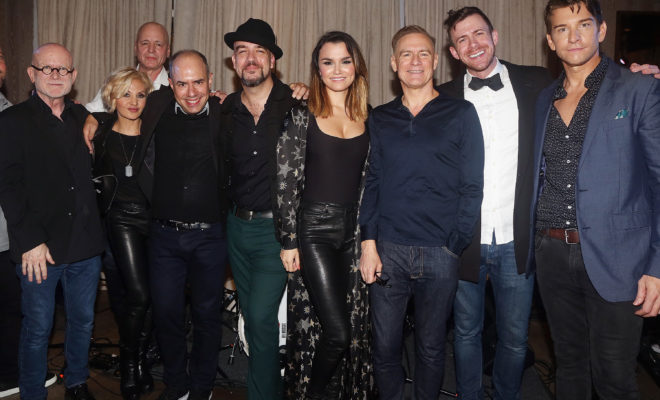 PRETTY WOMAN is the iconic 1990 romantic comedy directed by Garry Marshall and stars Julia Roberts and Richard Gere. It is the love story of Vivian Ward, a Hollywood prostitute, and Edward Lewis a businessman who hires Vivian to be his escort for the week. Roberts went on to win a Golden Globe for her portrayal and the film became an instant classic. Last August, PRETTY WOMAN: THE MUSICAL opened on Broadway to rave reviews. It features music by Bryan Adams and Jim Valance, and is orchestrated by Will Van Dyke, who we had the absolute pleasure of speaking with.

FOR THOSE WHO DO NOT KNOW, WHAT DOES THE JOB OF BEING MUSICAL DIRECTOR/ORCHESTRATOR OF A BROADWAY SHOW ENTAIL?
Music Directing and Orchestrating a Broadway show are actually two very different jobs, and I just happen to get to do both on PRETTY WOMAN!  Music Directing a show is really all about taking the music that the composers have written and teaching it to the company of actors.  Once a show is up and running the Music Director not only conducts the show on a nightly basis but also maintains the musicality of the show by noting the actors and the orchestra to make sure that quality of the performance stays consistent.  What makes PRETTY WOMAN unique is that I’m also the Orchestrator/Arranger.  Bryan Adams and Jim Valance are legendary pop/rock songwriters, but I had to take the songs they wrote for the show and filter them to versions that worked on stage.  That process always begins with arranging the songs so that they tell the story of the stage musical.  Sometimes it means changing the feel of a song, or adding background vocals, anything that helps make all the songs drive the narrative of the story.  Orchestrating the show is actually the last part of the puzzle, and that’s when someone takes the final arrangements and makes parts for all the musicians to play in the pit.  It’s a fun job because you also get to tell stories with the different instruments and how they track through the show.  At their core, every aspect of each job is about clear storytelling, and the objective of each is to make sure the musical story is as clear as the physical story on stage.

WHAT DOES A TYPICAL DAY IN THE LIFE LOOK LIKE WHILE WORKING ON PRETTY WOMAN?
I’m also a composer myself, so most days I spend working at home on my own writing projects.  I’ll get to the theatre a little bit before half hour to deal with any notes or other administrative things I need to do at the show, but for the most part it’s about playing the show and making the music!

WHAT DO YOU HOPE AUDIENCES TAKE AWAY FROM PRETTY WOMAN?
PRETTY WOMAN is a love story.  It’s about celebrating love no matter where you find it.  I think there is a lot to learn from seeing two people who are making ultimately bad decisions for their own lives unlock in each other the strength to make better choices.  That is what love is and it’s such a human thing.  I just hope that people take that away with one of Bryan and Jim’s amazing hooks playing in their head!

YOU ARE WORKING ON PRETTY WOMAN IN GERMANY AT THE END OF THE YEAR.  WILL THERE BE ANY MAJOR DIFFERENCES IN THE SHOW?
It will be in German!  That is going to be a huge difference and really fun for all of us to hear how the songs and story sound in a different language.  Other than that it is a replica production of Broadway.

YOU HAVE ALSO BEEN PART OF THE FIRST NATIONAL TOURING COMPANY OF WICKED.  HOW DOES BEING ON TOUR COMPARE TO BROADWAY?
For me it is really similar.  I spent a lot of time writing on the road as well.  The biggest difference is that you are in one place, obviously.  The hardest part about life on the road is packing your life up every few weeks and going someplace new.  It’s also one the greatest parts of touring, to get to see the rest of the county, and share art with it.  It’s a really awesome experience I think everyone should have.

WHO INSPIRED YOU TO GET INTO MUSIC?
I don’t really know the answer to this.  I always loved music growing up, and I didn’t quite know where I fit in.  I loved Elton John, and I love theatre music, but I didn’t know how rock and roll and theatre went together.  After I moved to New York I learned about Music Directing, Arranging, Orchestrating, and composing from Andrew Lippa.  Lippa was instrumental in getting my foot in the door to what I do now, but he also showed me that it was a thing I could do and I am good at.

DO YOU HAVE A DREAM SHOW AND OR PERSON TO WORK WITH?
I would love to work with Elton John, that really would be awesome.  As for a dream show, I think it would be one that I’ve written or am going to write.  I’ve been working really hard to get my own work out there as a writer, and I’m hoping that pays off soon!

WHAT OTHER UPCOMING PROJECTS ARE YOU WORKING ON THAT YOU CAN TELL US ABOUT?
I’m constantly writing with my musical writing partner Jeff Talbott on our original shows.  In addition to that, I have a PBS special coming out with Annaleigh Ashford of a show that we’ve been working on for a long time.  I’m also doing some concert dates with Matt Doyle, and I’ve started a band with Chris Dawn called STEREO DAWN, and we are going to start playing shows very soon!

Get your tickets to see PRETTY WOMAN on Broadway HERE. You will be singing “You’re Beautiful” all the way home, we guarentee because we know we did.