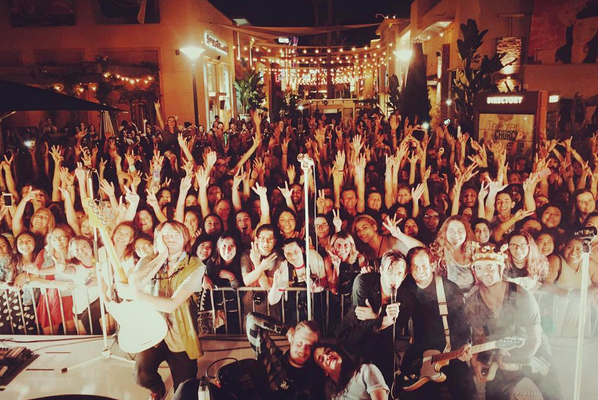 The Maine’s Free For All Tour

Arizona’s alternative band The Maine had announced a completely 100% free North American Tour this past July. The band says that this tour was years in the making and it was a way for them to thank their fans. The tour was scheduled to start August 30th and run through October 2nd with shows being played in outdoor shopping malls and parks. Alongside this tour, The Maine would play a handful of shows performing American Candy front to back with selected songs from their discography.

I recently attended the last date of the tour in Tustin California at the District in Tustin Legacy. Beach Weather, featuring Nick Santino of former A Rocket to the Moon, opened up for the Maine playing songs off their recently released EP, What A Drag. My personal favorite tracks performed were “Swoon” and “Wolf.”  Their tunes were so catchy and made me wanna dance along! 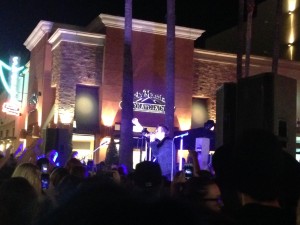 The Maine played a lot of songs off their newest album American Candy along with some old fan favorites from Can’t Stop Won’t Stop, Black and White, and Forever Halloween. Standouts from the setlist were “Am I Pretty?” , “Some Days,” and “Run.” John O’ Callaghan, frontman, led the crowd in an energetic set and even brought a fan onstage for “Right Girl.”

The Maine have been my favorite band since 2010 and my love for them grows more and more each time I see them. When they played “I Must Be Dreaming ,” “Everything I Ask For,” and “Whoever She Is,” I definitely shed a tear or two over nostalgia while also losing my cool as it brought back all those middle school feels. For a band to do something this huge and unprecedented, I was blown away and so grateful that they would do something like this to give back to their fans. It really shows how much they appreciate each and every one of their fans and that they love what they are doing every night they take the stage. The Free For All Tour was a definite can’t miss and it’s refreshing to see a band take the time and give back to their fans.