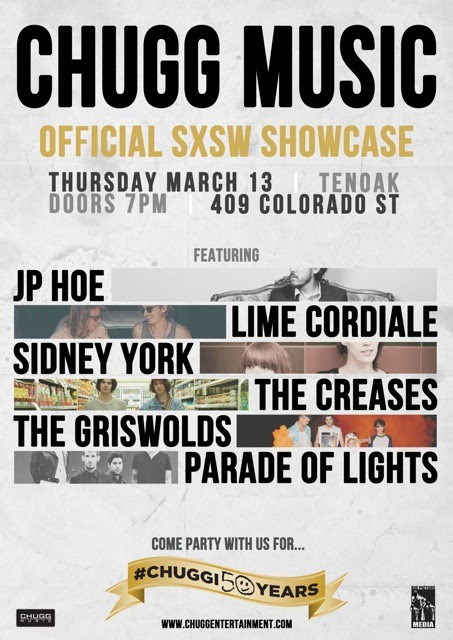 Just because we all know there’s so much more to South By South West than the original Official SXSW Showcase, I thought I would let you guys know about some of the other showcases you’ll be able to check out during the festival starting March 13th in Austin, TX.

This first showcase I wanted to tell you about is the SXSW 2014 Chugg Music Showcase. Held at TenOak (409 Colorado St.) on March 13th, from , the showcase will celebrate the expansion to the US of Australian label Chugg Entertainment and owner Michael “Chuggi” Chugg‘s 50 Years in the industry. From club shows to full stadiums, Chugg has previously worked with big names like Elton John, Robbie Williams or even Prince and Radiohead.

Now this showcase is definitively one you should check out, for it features bands from the US, Canada AND Australia! Starting 8:00pm, the 6 acts will take the stage one after the other every hour until 2:00am.

Kicking it off at 8:00 pm will be Western Canadian Music Award winning Contemporary artist JP Hoe. The Winnipeg singer should easily please your ears with his catchy hooks, folk melodies and his raspy voice. (@JPHoe)

Following JP at 9:00 pm with a wilder range of genres from pop to jazz, will be Sydney based 4-piece, Lime Cordiale. Named by SXSW as one of the 5 bands to see during the festival, you will soon become a fan of the band and its indie-rock tunes. (@LimeCordiale)

It is quite an unexpected Canadian female duo, Sidney York, who will get on stage 10:00 pm. When opera meets bassoon, it turns into surprising harmonies. Band members Brandi Sidoryk and Krista Wodelet will be making their way back to the SXSW stage after touring and performing at big events, including the 2010 Vancouver Olympics. (@SidneyYork)

At 11:00 pm, Brisbane based brand new band The Creases will take the stage with their energy and charming pop melodies. Formed not that long ago, during Summer 2013, Joe Agius and Jarrod Mahon along with bassist Aimon Clark and drummer Bridie McQueenie have already been invited to support Peace and The Preatures and will be embarking on a full Australian tour with Jungle Giants at the end of the month. (@TheCreases)

To start off a new day, at 12:00pm, fellow Australians The Griswolds will perform songs from their Heart Of Lions EP. A perfect mix of wit and deep reflections, the indie-rock sound of the band has pleased many since the band was formed in February 2012 and has even attracted the attention one of the world’s largest indie-rock labels Wind-up Records whom they signed with in May 2013. (@wetheGriswolds)

Finally, to finish the night after having gone back and forth between Canada and Australia, Parade of Lights, a Los Angeles based alt-electro band comprised of Ryan Daly, Anthony Improgo, Michelle Ashley & Randy Schulte will perform songs from their upcoming EP, “Golden”. (@ParadeofLights)