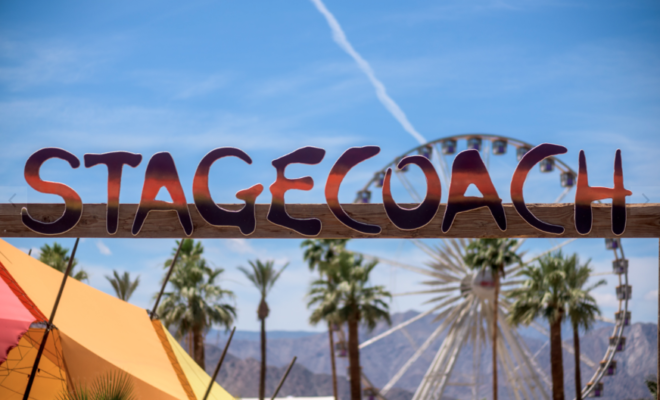 The time is drawing near for another exciting year of Stagecoach. This year marks the 10th anniversary of Stagecoach and brings with it a lineup you don’t want to miss. Straight out of Indio, CA festivities start on April 29th and run until May 1st. Headliners for the show include Eric Church, Carrie Underwood, and Luke Bryan.

April 29th is opening day of Stagecoach. The sun will hopefully be shining and the people will be pouring in to watch their favorite artists perform. The only question left is who is performing day 1? The main stage is going to be rocking country strong with acts such as Kristian Bush (formerly of Sugarland), Jana Kramer, Eric Paslay, Emmylou Harris, Sam Hunt, Chris Young and closing out the show for the night will be none other than Eric Church.

Jana Kramer is hitting the stage for her second year at Stagecoach. Kramer performed back in 2013 and rocked the house. This year she brings a whole new album to the stage and it’s very likely we will get to hear her current single “Said No One Ever” as well as her hit song “I Got The Boy.”

Eric Paslay is no stranger to the Stagecoach scene as he played back in 2014 and rocked the house back then as he will do again in 2016. With his current hit single ” High Class” climbing the charts and making its way to radio stations across the country Paslay is sure to get the crowd moving after a 2 year absence from Stagecoach.

How can you have an anniversary show without having one of the all time greats to perform at it. This year Emmylou Harris makes her second appearance for the Stagecoachh crowd as she was part of the first festival back in 2007. A legend in country music is just the beginning to describe Harris. With multiple albums spanning decades there is no telling what great songs she will bless the crowd with this year. One thing is for sure she will not disappoint.

This next artist is a first time performer. Sam Hunt is making his Stagecoach debut so let’s be sure to show him some love this year as he is sure to bring us his latest hits “Break Up In a Small Town,” “Take Your Time” as well as his current single “Make You Miss Me.” He is also featured on Carrie Underwood’s single “Heartbeat” which just went #1 today! The two recently performed on The GRAMMYs together! Welcome to Stagecoach Sam Hunt!!

With Chris Young’s current single “Think of You” featuring Cassadee Pope climbing the charts every day and his most recent single “I’m Comin’ Over” still on the charts as well its no wonder Stagecoach asked Young to return to stage. Young played the festival back in 2011 and after just 5 years is returning to bring his new album to the stage.

Closing out the night will be none other than Eric Church. Church is currently on the charts with his single “Mr. Misunderstood” he is also known for songs such as “Springsteen”, “Creepin'”, and “Homeboy”. With hit after hit it’s no wonder he is headlining night 1 of Stagecoach. Church like the other performers of the night is no stranger to Stagecoach as he has played the main stage before back in 2007 and as a headliner in 2014.

If this wasn’t enough to fill your music void have no fear because Stagecoach still has 2 other days with a whole new lineup for each day. Stayed tuned as our collaboration with Variety Beat will bring you the lineup for Day 2 and Day 3 very soon.