Former The King Blues’ front man  Jonathan Fox could have given up music when the band called it quits back in April 2012 after 7 years of hard work and 4 albums together, but why stop when there was some much more in him to give and so much more for him to say? Soon after the London-based ukulele punk rock band’s break up, Fox announced he would go solo under the name of “iTCH”. In November of that same year, iTCH released his first opus titled Manifesto Part 1: How To Fucking Rule At Life, under indie Los Angeles based label Red Bull Records. Loyal to the political ideas that The King Blues were sharing by the end of their run together –which had led to any mention ever of their name on the Daily Mail to be erased by the company– iTCH’s very first single as a solo artist “London Is Burning” strongly denounced the London riots happening at the time. It’s thus a very “angry young man” that the UK discovered back in 2012.

But since then, iTCH has learnt to make a name of his own, way beyond all this “rage” and is now dividing his time  writing and recording between London and Los Angeles. In 2013, he released the second part of his manifesto, We’re All In The Gutter, featuring among other great songs, a collaboration with Taking Back Sunday’s Adam Lazzara titled “Homeless Romantic”.

Later that year, iTCH joined the Vans Warped Tour where he got share his sound. Now, though only 2 months and a half into 2014, iTCH is already overbooked. He started the year by touring the UK with dan le sac Vs Scroobius Pip from January 18th to February 8th, and embarked on another tour, through the United States with Air Dubai, only a week later on February 15th.

And as if it wasn’t enough for him, iTCH has managed to fit the South By Southwest festival into his schedule. He will indeed make his debut at SXSW tonight in Austin, TX, during the Alternative Press’ Bonus Round Party, held at the Palmer Center. Other showcases he’ll be performing at during the festival include the Sony Electronics/’Stache Media Entercom Radio Showcase on March 13th, the Big Picture Media 2014 Showcase on March 14th and finally the Audio Tree Showcase the same day. 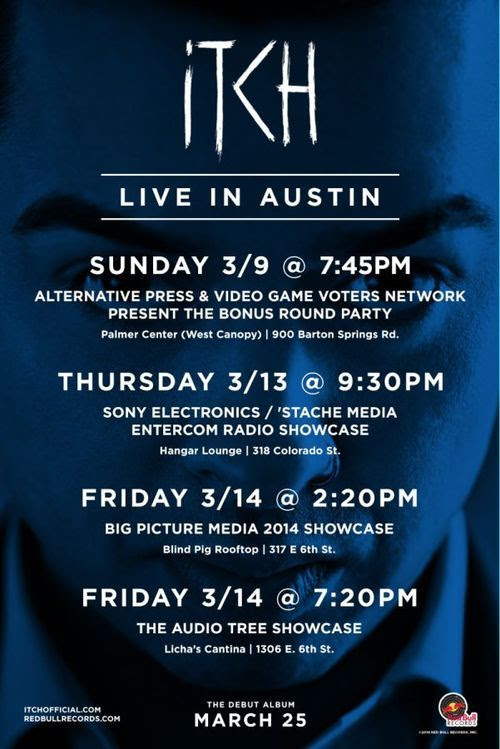 iTCH will be promoting his forthcoming album The Deep End, set to release on March 25th, and already up for pre-order on iTunes.