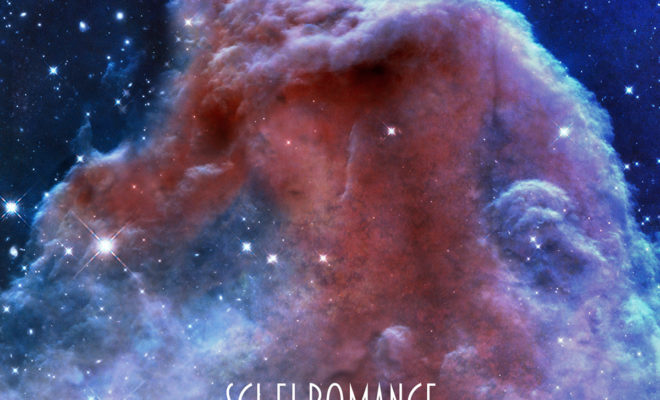 Talking to a creative mind like Vance Kotrla of Sci-Fi Romance is an experience from beginning to end. Vance, a father of four, and an artist in almost every realm imaginable started Sci-Fi Romance recording songs in hotel rooms and bedrooms. “The band started with just me, I had been playing drums in bands for years and year, and then as my space requirements changed I didn’t have as much room for my drum kits anymore so I taught myself how to play guitar and I wound up writing a bunch of songs, and started recording them mainly so I just wouldn’t forget them.” With the encouragement and convincing of friends he sent copies of the songs to for their honest opinions, Vance decided to release the first Sci-Fi Romance album. “It seemed scary so I decided to do it,” he laughs. The album was more well-received than he could have imagined, and it allowed Vance to see the opportunity to create more with the band, with some brilliant changes. “As the band moved forward and I actually got a drummer, I got a cellist and now on our third record, I think this is the closest we’ve come to the Sci-Fi Romance song that I hear in my head,” he explains.

Often times the addition of new band members will drastically change a songwriting process in a band, but for Sci-Fi Romance, it’s Vance’s creative vision that really directs the feeling the band goes for. “I don’t know how much it’s changed but I know that there’s impact and input from the other band members that make a tremendous difference,” he states. Vance writes and demos all the songs before bringing them to the band, but constantly cites his band members, like cellist Jody Stark as having the ability to tweak songs slightly, to having input that changes the entire structure. “I’ve always played in bands,” he explains enthusiastically. “I love that dynamic. And I think that if you surround yourself with people you trust have good taste the product is only gonna get better.”

It’s this outlook of working and improving together as a whole that allows Vance to see the intsturments, like cello, that most people wouldn’t think of for a small band as so important. “I think it’s my favorite instrument. And Jody and I have talked about this. She said that a lot of people refer to it as the most human instrument, it’s the one that most closely emulates a human voice,” And while, Vance can’t be sure it’s true, he takes Jody at her word for it, “because [the cello] has always really resonated with me. I’ve been very lucky I think that I’ve had experiences with two or three other bands where they’ve had cellist and they’ve not been the kind of bands where you would expect a cellist, but I’ve always really loved that dynamic.” He believes so much in this instrument that he wanted to give Jody her creative space, he wanted her to have solos and be able to showcase her talent. “And she said no one had ever really given her that opportunity before and she really took it and ran with it.” Jody’s ability has allowed Vance to really discover a more well-rounded image for his music.

The third album, Dust Among The Stars, was a very different process for Vance who previously had worked in hotels and bedrooms, and then a smaller less equipped studio. However, for the third record, “We were in a lovely studio this time, we didn’t have a ton of time to be in there. I think we had six days total to record this record.” Within the six days, they were able to seriously hone in on that Sci-Fi Romance sound that Vance focused on so much in his head. “I wanted to get more of a live kind of sound, more of a sense of us all playing together than having things individually tracked,” he explains. Having the bigger studio, and isolation needed allowed for this united live feeling on the record. “Part of the joy of being a band is playing as a band,” Vance states. This third record gave him a lot more time to prepare going in. He had the time to clear his mind and really understand what he wanted from this album, and it seems as though it’s paid off. “Reception is great. The longest I’ve ever spent on a single creative project,” Vance explains.

He believes a lot of the reason Sci-Fi Romance differences are so well-received is because he is a front man who “come[s] to music from a percussion point first,” and because of his diverse musical experiences and tastes. “The stuff that I’ve played in the past has created the now,” he says, from Metal bands to indie bands, and probably everything in-between Vance has become a sponge for the music he listens to, and what parts of each work best together. He listens to a lot of stuff from The National to Dillinger Escape Plan. As he puts it, it’s a “big swap of stuff… somebody once asked me what kind of music I like and I said ‘I like to think I listen to good music,’” he laughs. He likes to believe that any music that has the ability to emotionally connect people is worth listening to, and is exactly what he’s trying to do with Sci-Fi Romance.

Although touring is essential to a band, Vance’s four children come first. Right before the third album, he and his wife found out they were expecting two beautiful baby girls. “The twins are… I’m not blaming them, but they are the reason why there was such a big gap between album two and album three. Most of record three was written, and then we found out suddenly hey we’re having twins,” once again the smile in Vance’s voice is evident. It’s clear his kids are a huge inspiration for him. Between the kids, recording, and everything else, Vance makes time to animate his own music videos. The newest one off the third album, “Goodbye At The End Of The World” was done at home and of course, has aliens. “I wound up making a video about a guy and girl not getting along… and then aliens come… cause you know that stuff happens… and then they have to save the world in four minutes.” Which, as everyone knows, is a common occurrence for most humans.

With a plan to release more songs in the next year, Sci-Fi Romance, lead fearlessly by Vance, won’t be slowing down, or creating new experiences anytime soon. You can check out their new album now!