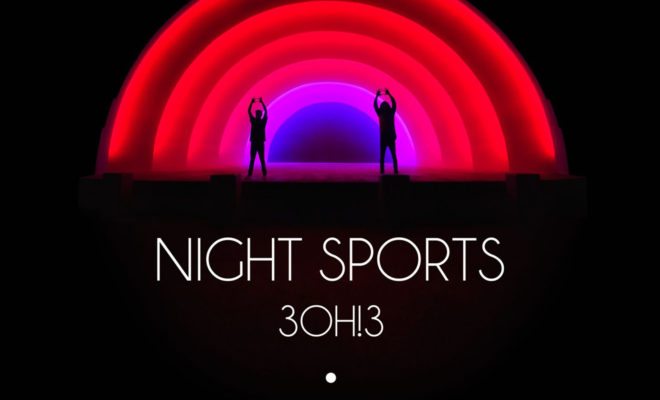 Known for their borderline offensive lyrics and antics, 3OH!3 is finally back with their new album titled Night Sports. If you thought that a three year gap in between records might have changed their unique material, you will  not be disappointed. They’ve spent the last few years writing and producing for artists such as Beck and Maroon 5 before deciding to come back to write and self-produce their latest album.

Night Sports shows that Sean Foreman and Nathaniel Motte are still not afraid of mocking anything and everything and, most importantly, having fun.

First track on the album, “Fire in the Heavens”, creates a good intro back into the world of 3OH!3 with chanting of the band name and a mix between slower and faster melodies. The majority of the tracks keep that club-esque feel with quick beats and catchy lyrics… and then there’s “those” songs. You know the ones. I’ll give you a hint: one of the songs, “My Dick”, is a track where I wrote down the following notes – “Wow. Oh wow. OMG. What?! People are going to hate this. I like it.” Classic 3OH!3.

Night Sports is out now via Atlantic Records and you can catch them on select dates of Warped Tour.

← Previous Story If Ferris Bueller’s Day Off Was Set in 2016
Next Story → Tour Alert: Gavin DeGraw and Andy Grammer are Hitting the Road this Fall!