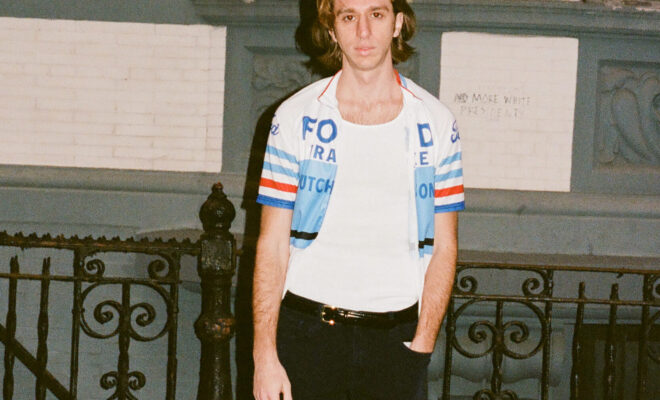 Stage Right Secrets caught up with NYC-native Rebounder. The singer/songwriter/producer recently released his latest single, “Night Sports.” Read our exclusive Q&A, below.
Congrats on “Night Sports,” how did the concept come about to have so many different people in it?
Thank you! When it came time to shoot a video, it didn’t seem responsible to get a bunch of people in a room and party, but that’s really what the song is about. I posted a few Instagram stories asking all my friends to send in videos of them having good times, then found a few on my phone. My buddy, Ben is a great director and editor, and he compiled it into the video!
It really showcases NYC. What are your favorite New York hidden gems?
If I say then they won’t be hidden! I really like the East river park tennis courts on the FDR. This summer I also spent a lot of time in Seward park. I have a studio in greenpoint, so I like skating around there near McCarren park.
Do you think New York has played a role in the vibe or any creative aspects of your music?
Totally, I think a lot of my music is informed by being from here. Whether it’s a musical cue or a story the song is telling, I think both would be pretty different anywhere else.
[embedyt] https://www.youtube.com/watch?v=aeQlEo-zkeI[/embedyt]
Are you working on new music currently?
Yes, finishing up a new project right now. It’s nearly done, recorded mostly during quarantine at my apartment and studio, really excited. I think it’s 5 songs. James Ireland from Pond did some mixing on some of the tunes, it was cool to work remotely with someone on the other side of the world.
I think after Night Sports I’ll start releasing the new stuff. My little brother Noah (Chenfeld) also sings lead on some of it.
Did you find it easier or harder to be creative while stuck at home due to the pandemic?
Initially I found it really difficult. I think a lot of people did. Now that we’re all a bit more used to this life I think I can make it work. One thing that I’ve found helpful is moving around, even if it’s between rooms. Some days I just practice guitar and write songs in my kitchen, other days I bike to the studio. In the beginning I was just cooped up and not leaving my bedroom, not hard to understand why I didn’t get a lot of great work done then.
Has your creative process changed at all?
These days I’ve been doing so much production. Sometimes the production leads the song and isn’t the final thing but the first thing, I think that’s just with using production / laptop as an instrument. Sometimes I’ll make tracks / grooves / riffs and work that way, where in the past I would’ve thought that was backwards. I know that’s how a lot of modern pop music, rap music is made, I don’t know if as many ‘indie’ heads make tracks, then write to them, then go back and forth between the two, but that’s been a fun way to keep it exciting for me.  I still like sitting down with one instrument and writing a more traditional song, I think the forthcoming project has a bit of both.
Since most of the world is or was in quarantine, what did you do to pass the time?
Watched all of Peaky Blinders, which was fantastic. Finally caught up on some old movies and books. Lots of home workouts, though I don’t know if that’s something to really publicize. Skated and played a lot of tennis.
What do you think the music industry will look like in the future?
A lot of mid size acts playing to their audiences, less phenomena. Good and bad. A lot of live streams.  I do think the era of only rap and pop being allowed to be proper mainstream acts will come to a close as streaming democratizes what can become ‘popular music’. Hopefully the music climate becomes a bit more like the late 80’s/ early 90’s where what is considered ‘pop’ is what is ‘popular’ and not something made after the fact to emulate it.
Taking it back, what was the first album that made you fall in love with music?
Probably Nirvana’s “Nevermind,” what can I say, I’m a unique guy.
What made you decide to go into production?
Nobody in New York could produce my songs the way I wanted to, and I was tired of spending money and leaving with something I didn’t love. I always thought working with a producer would speed up the process, but I realized it’s better in the long run to lean in and learn the skill. Now I produce my little brother and some friends acts and love it so much, I’m thrilled I spent the time. It’s so much fun. I think Rebounder would be a lot different or maybe a non entity if I didn’t put the time in.
What advice would you give your younger self before getting into the industry?
I could’ve learned production a bit earlier. There was a period of time where my brother Noah and I were touring musicians in other acts, it was a great time, we did it to learn and to see what it’d be like to ‘do it for real’. I think when we returned to New York we were as excited as ever, but probably could’ve spent a bit less time on the road and a bit more time in the studio. These days we’re certainly getting that so I’m not mad. Living in New York forever has had its advantages, I guess I’d tell my younger self to truly go have a great time in the city, and figure the rest out later.
Related ItemsRebounder
Jacklyn