Remember these names: Prem Singh and Michael Pugliese. Memorize them. This will not be the last time you hear them. The duo met at acting class and had an immediate connection. Fast forward to present day and they are starring in a film together. Did we mention they wrote it? And it’s an incredible true story about a Sikh boxer? Oh, well now you know. 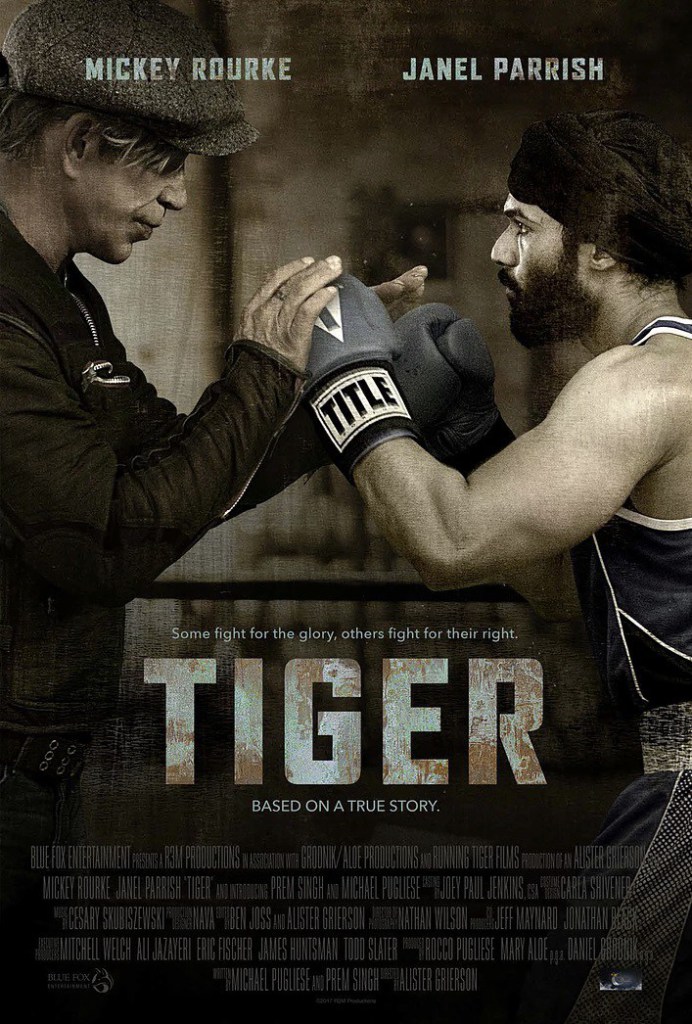 SRS: First and foremost, who was Pardeep Nagra and why is his story so important?

Michael: Pardeep Nagra is a Sikh man who was banned from the sport of boxing for refusing to back down from his religious beliefs and views. We feel with Tiger and Pardeep’s story, we can help educate the uneducated about a misunderstood religion. We can also encourage anyone who is being mistreated to stand up and brave the situation head-on just as Pardeep has. To spread empathy and love rather than hate. The world needs it.

Prem: Pardeep Singh Nagra, is a Boxer who was working towards representing the country in the Olympics back in 1999 and he faced a major roadblock when the Boxing Association told him he had to shave his beard in order to move up the ranks. It didn’t matter how good he was– he was told to change. Today, this story is more important more than ever with what is happening in the world. Look at the Women’s Movement, racism in our country, and people struggling every day with their own identity. Pardeep’s journey is about a Sikh man’s journey but at the same time it speaks to everyone who is facing these types of problems. Many people will be able to relate to this story.

SRS: Has Pardeep Nagra seen the film? And if so what were his thoughts?

Michael: We were fortunate to have Pardeep live so close and have him willing to share his journey with us. Pardeep let us create his story without much guidance. He trusted our judgement and was thrilled to have his story told. He’s definitely proud of the outcome and the message that Tiger portrays.

Prem: Pardeep has seen the film and he has been supportive of the film when we just had an idea and pitch, all the way through the final product. He is happy that this film will send a message he has been preaching throughout his entire life.

SRS: Tiger is the first screenplay you have written together. Incredible! What do you think your writing partner brings to the table that is unique?

Michael: He’s my brother. We have the same drive, same passion, same work ethic on and off the screen. We’ve been on this positive wave since the first time we met in acting class. We just clicked and I think that really helps any partnership. In all fairness, Prem is an incredible guy inside and out. He brings the best version of himself to every situation.

Prem: Michael is a brilliant writer! He brings his drive, passion and intelligence– who wouldn’t want a writing partner like that! The most important part is that he and I gel so well whether it is writing or sharing the screen. Once you all see the film you will never guess that we worked so well together.

SRS: You not only wrote it but you both star in it too. Is there anything you guys can’t do? And did you ever consider just sticking behind the scenes and hiring actors?

Michael: I can’t do a backflip. I’ve tried a bunch of times and it really never works out. My neck is still sore from my last attempt. All kidding aside, we just had a burning desire to start and finish something we would both be proud of. We love to be in front of the camera and it’s the main reason why we decided to create something of our own. We’re both born and raised in Toronto and started going out for auditions at a young age. Never truly content with the roles we were receiving sparked the conversation to write our own roles and our own stories.

Prem: I can’t cook! But I am sure if Michael and I were in the kitchen together we would make a killer dish!! We love to do it all!! It’s so rewarding at the end of the day that we can create something we feel so passionate about and share it with the world. We love this business from acting to writing to even producing, and with the drive we have it’s very hard to just stick behind the scenes.

Will the real Pardeep Nagra please stand up. On set with the man who inspired #tigermovie, the “real” Pardeep Nagra. Also with Prem Singh and Marshall Manesh.

SRS: The story of how you got Academy Award nominee Mickey Rourke to join the feature is pretty darn awesome. How exactly did you pitch the film to him?

Michael: Thanks! I don’t condone stalking Oscar nominated actors or anyone for that matter but in the case of getting a movie made… it’s definitely acceptable. We found out where Mickey trained and went to his gym. Prem can literally find anything about anyone on the web. It’s kind of scary. We ended up going to the gym, punched boxing bags and skipping for hours until he walked in. We got introduced by the owner (Freddy Roach) and spoke to Mickey for about 45 minutes. The rest was history.

Prem: Michael always says he stalked him! I disagree….we found out where he trained and we “waited” many hours until he arrived. We met outside of Wild Card boxing in LA and when we finally got a chance to speak with him we ended up talking for around 45 minutes, and he loved the idea of the movement we could create. He was on board and through the proper channels we got him officially on board and the rest is history.

SRS: We heard you raised four million dollars to make the feature. How did you do that?

Prem: Not easy I will tell you that. We worked extremely hard traveling across the country, to make this film happen and we couldn’t have done it without our head producer: Rocco Pugliese (R3M Productions), Dan Grodnik, Robert Kwartler. These guys were so passionate about the film and they made sure we would get it made and here we are today–promoting the film!

SRS: What do you hope audiences take away from the movie?

Michael: We want the viewers to be encouraged to stand up for what they believe in, no matter what it is. Whether it’s your gender, ethnic background, skin tone, sexual orientation, – whatever it may be. If you believe in it. Stand up for it. Because nothing but good will come from it. And we hope Tiger inspires others to do just that.

Prem: I truly hope people will start a conversation. With what is happening in our world we want to create a movement. A movement about equality, love and respect for one another. We are very divided and I hope TIGER can bring people together no matter your race, sexual orientation, beliefs, or gender it shouldn’t be a factor on how you should be viewed in this world. I think we can really move towards this if we want to, but it has to start somewhere and someone has to start it.

Reunited once again with @janelparrish. Went to go watch @grease_to, and what a great show this was! Janel you did a great job! Very beautiful and very talented! The entire cast killed it on stage! Rizzo @katicatronica you were flawless! Guys whatever you do, this holiday season go and watch grease at the Winter Elgin Theatre, before it’s too late!!! You won’t be sorry! #broadway #toronto #grease #musical #tellmemore #summerlovin

SRS: Word on the street is Fat Joe and Manj Ral are signed for the film’s end credit song. Have you heard it yet?

Michael: Prem and myself partnered up with Andrew Licata and together co-founded Running Tiger Records. Andrew spearheads the company and thought it would be a great opportunity to have a needle drop during the ending credits. Sooo… the word on the street is correct! Fat Joe is in the midst of recording his verse on a track that Manj produced. We’ve heard bits and pieces and let me tell you, it’s awesome!. It’s that perfect mix of American flow from Fat Joe and the Eastern cultural flair that Manj brings to the table. We hope it gets people on their feet and dancing their way out of the theatre.

Prem: Yes! We heard it! It is outstanding! We have a company called Running Tiger Records, and helping us spearhead this entire track is one of our partners Andrew Licata, who is amazing at what he does, and was on board to the idea the minute we pitched it to him. Michael and I knew about Manj and had seen the great work he has done in India and when we all collaborated, we ended up getting Fat Joe involved.  I am excited for all of you to hear it because it is a great track!

SRS: We have learned that Sikh boxers in Canada are now allowed to wear beards in the ring but not internationally and Pardeep Nagra is still fighting for it. Sounds like a sequel to us! What is the future looking like for you two? Can we expect more films, more acting or both?

Michael: “Tiger 2: The fight continues”. It’s a working title 😉  Along with the promotional push for Tiger, Prem and myself have a few things we’re working on. We want to inspire, motivate, and assist the world of cinema in a positive way and with Tiger in the forefront, it’s an exciting time.

Prem: This issue is still going on, Pardeep and major Sikh Organizations such as: Sikh Coalition, SELDEF, United Sikhs, are fighting every day in America to ensure the rights of Sikh Americans, and with everyone coming together we know TIGER will leave a mark on these issues and hopefully we can continue to progress. As for a sequel?? never say never, but let’s get this out the world first and see what happens from there. As for us acting again, we are working on a few projects under our banner Running Tiger Films and you will see more of us in the future, but until then we will be traveling all over the place creating a Tiger movement.

Related ItemsMichael PugliesePrem SinghTIGER
Giselle
← Previous Story Getting Personal With Country Duo Indigo Summer
Next Story → Gear Up For MUSINK With Our Playlist!