Two years after the  release of Magic!’s first album Don’t Kill the Magic, the band has finally released their second record Primary Colours. Leading up to the release of the album, Magic! has released singles including “Lay You Down Easy” ft. Sean Paul and “Red Dress” both of which were accompanied by music videos.

Check out the tracklist for the Album: 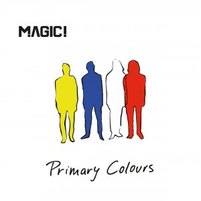 The album may only be 10 tracks yet Magic! kept their infusion of pop and reggae similar to their previous release. It’s rather good to see that after 2 years, they have managed to remain artists with the vision of music first. It’s clear the music they release is not to create hit after hit but rather to express situations and provide a certain perspective. There’s meaning behind the title Primary Colours as Nasri Atweh, front man of Magic!, recently told Billboard “….you have to go back to the basics and make sure that you’re mixing the right colors together.”

This album is worth a listen, if you need some convincing just watch Magic! perform one of the tracks on the album, “Gloria” at CBC Music:

BottleRock is this weekend and we are so excited!

The Smith Twins in New Writers is @54below on May