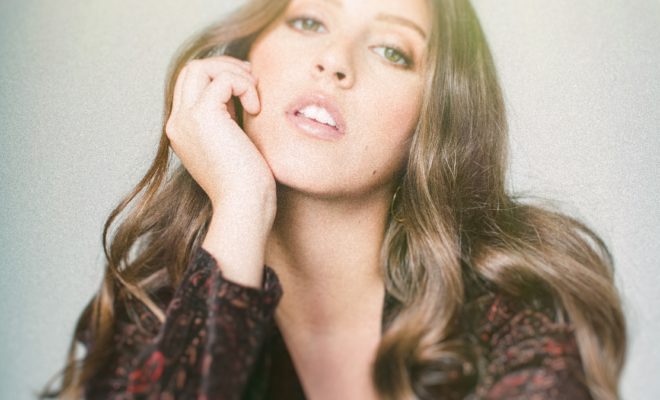 Stage Right Secrets caught up with rising Altadena/Warner Records singer/songwriter Lindsey Lomis. We spoke about her debut single on the label, what life is like in quarantine, and new music. Read our exclusive Q&A below.

Congrats on “Feel,” how did you come up with the concept for the song?
Thank you!! I honestly didn’t go into the session with any concept, it was really a spur of
the moment type of thing. My producer and co-writer Ryan Daly and I built out the
melody and then the lyrics flowed naturally based off the vibe of the track. By the end of
the session I felt super connected to the message behind the song. I realized that for me
it was about toxic friendships I had in the past.

Can we expect a music video and what would you like to see in it?
We actually did film a music video for Feel! We had intended on doing a professional
shoot until the coronavirus hit and we all had to follow the stay at home orders. I knew I
still wanted a video to be released with the song, so we actually filmed it at home! My
whole family was involved: my brother worked the camera, my mom held up the
director, Matt Earl, on zoom, and my dad filmed some behind the scenes which will be
coming out very shortly 🙂 It turned out to be a really unique and fun experience and I’m
proud of what we created!

You just signed with Altadena/Warner, how did that come about?
I posted a few covers on Instagram that were getting noticed and had just released my
first single “Simple Love” off my EP when people started reaching out for introductory
meetings. I was saying yes to everything and meeting with anyone who reached out. It
was all so new to me. When I finally met some of the Altadena team I immediately
clicked with them. Then I met the incredible Busbee (who launched Altadena) and got
the chance to work with him. After talking with him about the company and about
music as a whole, I knew I was going to be working with this team. Busbee then
introduced me to Aaron Bayshuck over at Warner Records and I again loved everyone
over there. They’re all just such good people who are willing to back my vision. I went
with my gut and signed with them and it has been even more amazing than I thought!

Your single truly does bridge genres, what influenced you growing up and how has your taste
evolved over the years?
I grew up listening to all sorts of music. One of the first artists I fell in love with was
Adele. I got her 21 album for Christmas when I was younger and used to use my bunk
bed as a stage singing to her CD. Then I started playing guitar and was obsessed with
Tori Kelly. Her riffs, songwriting, and guitar playing influenced me massively. Over the
years I’ve loved people like Allen Stone, Leon Bridges, Cage The Elephant, Amy
Winehouse, Twenty One Pilots, and many more. I definitely think that listening to
multiple genres has helped build my sound which bridges those different influences.

Taking it back, was there a specific moment when you realized that you wanted to make music
your career?
I pretty much knew I was going to be a singer/musician since I was really young. I had
been singing since I could speak and absolutely loved it, but I started taking it seriously
around 10. Growing up in Nashville, music was never really an out-of-reach career like it
is in other places. I was lucky to have some incredible mentors since I was little, so it
didn’t seem like a fantasy to me; I knew I could make it happen.

Do you remember the first album you bought or first concert you attended?
Oddly enough, streaming has been a part of my life for a while, so I never really got to
go to a music store and purchase a physical record! But I’d say the first CD my parents
got me that I remember playing non-stop was that Adele 21 album. My parents have
been taking me to shows since I was in a baby carrier, but the first one I remember
going to with a friend and having a real concert experience was a Colbie Caillat concert
when I was 9. We felt so cool.

Since most of the country is or was in quarantine, what did/are you doing to pass the time?
It’s been a pretty boring couple of months haha! I have been occupying myself with
writing over zoom, eating, binge-watching literally everything (some of my favorites
have been Defending Jacob, I Know This Much Is True, and the new season of 13
Reasons Why), and taking nice walks through the neighborhood. I’ve also been subtly
asking my parents for a dog all of quarantine and we’re finally getting one next week!
I’m so excited 🙂

Do you find it harder or easier to be creative while stuck at home?
I find it much harder. I feel like my creativity thrives off of traveling and being busy. With
everything at such a slow pace, it’s hard to dig for inspiration. But luckily I’m still co-
writing virtually which has been very helpful.

Are you thinking about an album or have any future releases planned?
I definitely have some exciting new releases planned! Maybe an EP, maybe some
collabs, maybe another video… you’ll see 😉

What else can fans expect from you this year?
It’s hard to say exactly what this year is going to look like, but I know for a fact I will
continue to write and release some music I’m very proud of! I’m hoping everyone stays
safe and can find some comfort in my music during this strange time.