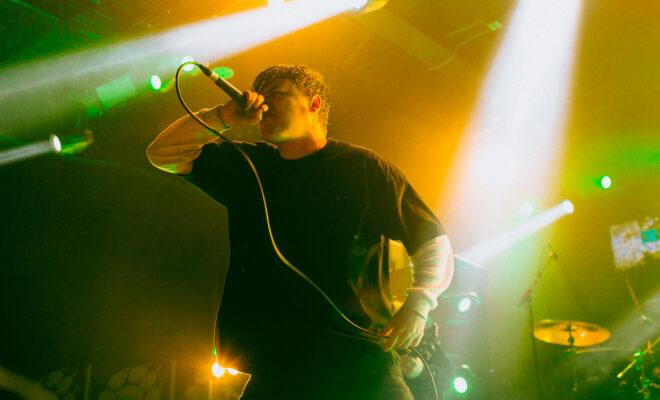 Knocked Loose Leaves It All On Stage in Fort Wayne

At the tail end of their spring tour for A Tear in the Fabric of Life, Knocked Loose managed to leave the energy floating in the room far past the end of their set.

Playing to a nearly sold-out crowd at Fort Wayne’s finest, Piere’s, Knocked Loose appealed to both old fans and new, performing a wild set comprised of everything from the classics like “All My Friends,” and “Billy No Mates” to the intriguing and intense entirety of A Tear in the Fabric of Life, the band’s most recent release. The EP, released last fall, is a concept album that follows the story of someone mourning the loss of their significant other who has died in a car crash.

With the stage set with smoke, strobes, amps decorated to look like gothic cathedral windows, and drumheads decorated with eyes wide open, they got all the details right. A setlist pieced together like a puzzle, and the skill-set needed to add another dimension to their performance guaranteed that the band had the entire room moving. Between Nicko [Calderon] moving like lightning and holding down stage right with some jaw-dropping rhythm, and Isaac [Hale] across the way playing spot on, the tone of the set was there from the beginning of the night to the end. With Kevin [Kaine] on drums, and Kevin [Otten] on bass, the pace was set as well, and neither the band nor the fans ever veered off-track from it. And tying it all together was Bryan [Garris] on vocals.

Not unnoticed during the band’s set was their vocal support of marginalized people and those who are struggling, something that is much needed but not frequently seen in metal and hardcore. Dedicating one song to the LGBTQIA+ community, another to those grieving for someone, and another to victims of domestic abuse, they made sure to remind folks that the show they were attending was an environment for everyone, and everyone gets to be there, enjoy the experience, pit hard, and have fun. Countless circle pits opened throughout the night, and endless crowd-surfers were showing their stuff, as well, and the energy in the room was entirely tangible.

Starting off their set with “Where Light Divides the Holler,” they came out intense, and ending it with “Counting Worms” and “Permanent” back to back, they left the crowd full of adrenaline and sheer excitement. Knocked Loose is worth the watch, every time, and they managed to show it yet again with this phenomenal performance.