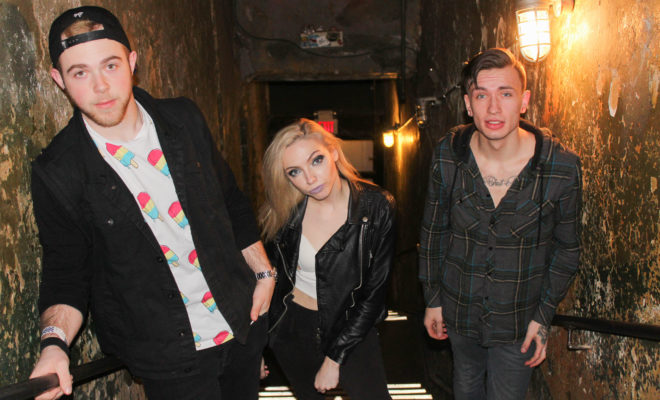 Interview: VISTA is Breaking Onto the Music Scene

Who is VISTA and what is your sound like?

VISTA: VISTA is lead vocalist Hope Vista, drummer Wolf Reiter, and guitarist Brian Canfield! We’re defining it as ‘anthemic alternative rock,’ it’s kind of something we just came up with that we felt defines us best! Real drum heavy, filled with chants and very reminiscent of a live show.

What made you choose the name VISTA?

VISTA: “Vista” is actually Hope’s real-life middle name, and she uses it as her stage name. We decided on VISTA as the band name because of the actual meaning of the word, it basically means a beautiful view through a long opening. It kind of just matched up with what we want for the band, and it’s also a word that listeners from Hope’s solo career are familiar with!

When did you guys start collaborating, and what has the transition been like going from a solo artist to a trio now?

VISTA: Wolf had been Hope’s touring drummer since July 2015, but they’d known each other since 2012 or so. Brian and Wolf had been in a few bands together beforehand, and Hope met Brian that way. He was supposed to be one of Hope’s new touring guitarists in November 2015. The live band aspect is still the same, but Hope was really used to making all the decisions herself and writing the material alone. It’s been a huge learning process for her, making sure that the playing ground is even between all of the bandmates. That’s what she wants, she wants everything to be even between everyone, that’s important. 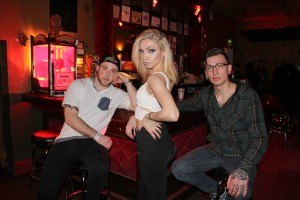 Which artists or bands would you say have influenced VISTA’s sound the most, or artists that you generally look up to?

VISTA: We sat for a whole day and made lists of little influences in songs that we loved. So in one song we wrote down that we loved the heavy kick drum, in another we’d say that the clapping pattern was sick. It was a list of small influences that we used as inspiration to define and create our own personal genre. We’ve found a lot of influence in Paramore’s drum tones on their album, “Riot!,” different bass drum patterns, the dark undertones in PVRIS’ tracks, the amount of energy Set It Off has. It’s all little things that we kind of hear between the lines.

How has the response been to the single you guys released a few weeks ago?

VISTA: Pretty sick, honestly! It was an unannounced release unfortunately, iTunes messed up our original release date and didn’t give us a new one. But for an unannounced release, we were pretty happy with it. Everyone’s feedback has been great, just some really welcoming vibes. We like that a lot!

How does your music as a VISTA differ from music released as a solo artist under Hope Vista?

VISTA: It’s the same writer, so the lyrical depth is absolutely not going to change. Hope pays so much attention to lyrics. The main difference is probably that she has Wolf writing with her a lot of the time now and she’s working off of his energy and ideas, too. That’s new for her, but we’re also defining this ‘anthemic alternative rock’ genre for ourselves and exploring how we can characterize that. Everything we put out is going to have some kind of anthemic element to it.

What can fans expect from VISTA this year?

Our new EP in April, which is going to be called “VERSUS.” That’ll be in late April, we’re finishing that up this weekend! We have a little content release timeline, so there will definitely be more music throughout the year at some point. It’s going to be a year of content. We’re announcing a string of shows very soon, they could be announced by the time this goes up. We’re just waiting for the okay to announce them. There will definitely be a good amount of shows this summer that we’re working on, and we’re about to start talking about the Fall soon because Wolf is taking the semester off. More YouTube content too, we like doing that.