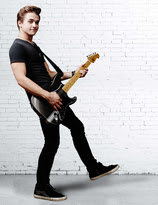 All fans in attendance at the shows can download the official Hunter Hayes Tour App (available for Apple and Android phones) to physically integrate into the tour’s lighting design and participate in the entire show using #YouAreTheShow.
The app is available now at http://smarturl.it/HHMobileApp.To date, Hayes has performed at two USO concerts–one at Naval Station Norfolk in Virginia and one at Royal Air Force Mildenhall in the U.K.–in support of the “Every Moment Counts” campaign.Tour mates Dan + Shay and The Railers will also join Hayes for the Nov. 3 show in Nashville, which is set to begin outside Bridgestone Arena at 10:30 p.m. with additional special guests to be announced.

You can catch Hunter on his Tattoo (Your Name) Tour dates here!