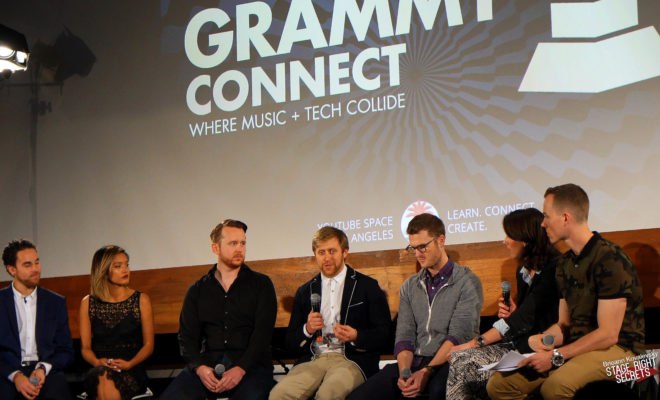 GRAMMY Connect: Grammy Week Event With Us The Duo, Pentatonix, and More! 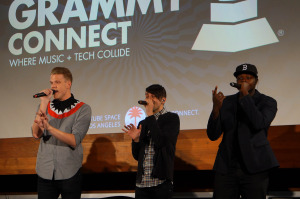 Last night we had the pleasure of attending the YouTube Space LA GRAMMY Connect event which featured a panel of music industry leaders, Us the Duo, and the GRAMMY nominated group Pentatonix. The scene was so modern with high fashion music pros on their iPhones sitting in abstract chairs, windows that fold up to create open space between inside and outside, and floor tiles that light up. Youtube Space LA, located specifically in Playa Vista California, hosts many workshops and classes for people who are interested in making videos and improving their channel. If you have over 10,000 subscribers you can even rent out one of the many studios for FREE and use all the equipment you need to create videos. Youtube Space LA really wants you to be successful in what you love and they will help you with tools you may need. 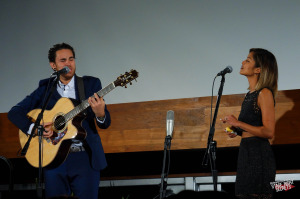 The first performance of the night was by Us the Duo. Michael and Carissa Alverado hit their fame by using youtube and vine to show off their talent and labels noticed. They are the first vine stars to ever get a record deal from it and after seeing their performance there’s no way you could ever question how talented and amazing they are. The first song they performed was No Matter Where You Are which was actually the couple’s wedding vows to each other. After the audience aww’d and felt gooey inside, they played one last song before exiting the stage and seven seats were placed on stage for speakers. 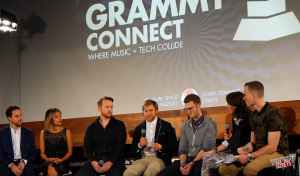 The night was hosted by producer and television host, DJ Skee, who introduced us to our panel of music leaders that would be answering some questions about A&R (Artist and Repertoire) and how the industry has changed with new technologies now available to artists. The speakers for the event were Margaret Hart (Artist & Label Relations, YouTube Music), Jonathon Kalter (the MGMT Company), Brad Haugen (CMO, SB Projects), Alex Wilhelm (Sr. Director A&R, Capitol Music Group), and Carissa and Michael Alverado. DJ Skee asked a variety of questions for the group and I have summed up the answers for you all so that you know what the industry is looking for and how it works!
What is the biggest misconception about A&R? 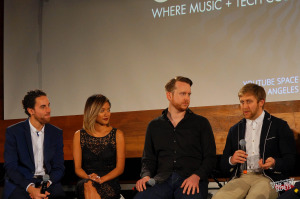 It’s not just about finding talent. It’s being the spokesperson for the artist and hooking them up with all the right people so that the artist can grow and succeed. You have to find the artist that has the talent and vision to grow and you fight for them. And with the success of youtube fame, it’s not just about how many views you have. Youtube is a starting point. You have to be the creative director for the artist. Michael and Carissa Alverado said that from their experience they thought that A&R just signed up artists. But they develop you from the ground up and they’re more like a directive counselor for their career.

How can artists get views and still not get signed?
It’s a tough question but the artist has to be able to interact with real people. Being alone with your computer and playing for a camera is very different than interacting with a huge crowd and having a stage presence. What they look for is a “star quality” which is an intangible thing, but when you see it you know it’s there.
That being said, how do you evaluate talent?
It’s case by case, but you have to have that “thing”. Youtube hits doesn’t mean you have the “thing” to be a performing artist. It doesn’t mean you don’t have talent, but it’s missing the star quality that A&R are looking for.

Is there a negative stigma for being off YouTube?
Carissa and Michael answered this question because they had experience. Vine definitely did help them get the recognition they needed but they want to be more than vine stars. There’s a transition that has to take place and it takes time and rebranding. That being said, it’s still very important to stay true to your roots. If Us the Duo is popular because of their vines, it’s great to tour and do new things, but they want to still do vines because that’s what people know and how people found them. If they ditched vine, their fans might get upset and see them as sell outs so it’s very important to find a good balance between sticking to your roots and trying new things.

How has the industry adjusted?
The passion and motivation for music has not changed, just the platforms on how to reach the public. The most important question A&R people ask while looking at an artist is: Is it good? Do people want to listen to it? Why?
If you can easily answer these questions about an artist, they might have what it takes to make it. Margaret Hart explained how youtube is creating “merch cards” to put on videos for all artists so that they can sell their merch with their youtube videos. I think that’s a great idea! This would allow artists to advertise to their direct audience instead of leading them somewhere else or waiting for some type of tour to happen.

How do you separate yourself from others on vine or other social media platforms?
Don’t think too much. Don’t plan too hard. Put what you want out there and just see what happens. Stay consistent. If you tell your fans you’re going to put out one video a month, put out one a month. One a week? Make sure to do it once a week. Always stretch for new ideas. Do what you know and are passionate about. Engage your fans and try to break the fourth wall. Do what is real and work hard. Fans know if you’re not putting your best foot forward or that you’re just spewing nonsense. The group also said to be prepared. If something does happen like you get an amazing opportunity, be prepared to grasp it and don’t go into it blindly.

Is A&R needed anymore?
This is a big question many new artists are asking themselves. With new technology it’s easier to sell and promote your own music, so is representation really needed? It all depends on where you want to go. If you really want to make it big, you need experts to take care of you. Having relationships in the industry is VERY important, the more people you know, the more places you’ll get to. You don’t need to be signed to a record label to be an artist, but it really helps again to have a team of experts helping you along the way so that you can focus on the most important factor: the music.

Advice on being an A&R?
Don’t let someone talk you out of something just because they couldn’t do it themselves. Where your headed is more important than how fast you’re going to get there. Be prepared, know what you’re doing and do it yourself. If you know what you’re doing, if an opportunity pops up, you can grasp it with both hands.

What is the new definition of A&R?
Continuing momentum of an artist. Promoting them. Making the artist bigger than their current shell. Look into new places and most of all, be a creative director.

With that the panel of music industry leaders left the stage and cleared it up for GRAMMY nominee Pentatonix. This a capella group sings covers of pop music, medleys, and original material. This year Pentatonix will be presenting a GRAMMY alongside an artist (who we were not allowed to find out until we watch on Sunday night) along with being nominated for the Best Arrangement, Instrumental or A Capella category for their Daft Punk medley. The group first busted out Ariana Grande’s Problem and I was blown away. The group has SO much energy and they all love what they’re doing. Their second piece was the first song they ever arranged together as a group, Telephone by Lady Gaga featuring Beyonce. Their covers are so detailed and it’s amazing how five people can pull these sounds out of thin air to create something that sounds like what a bunch of producers put together for one artist. The last song they performed was their Daft Punk medley that will hopefully win them their GRAMMY on Sunday night.
This was an amazing opportunity to see some great performances and learn about how technology and music are colliding. I hope that young artists who are recording on youtube, vine, instagram, etc. see what a great opportunity they have to get noticed and really take note on what these professionals have to say so that next year Stage Right Secrets can report on you and your GRAMMY nominations.