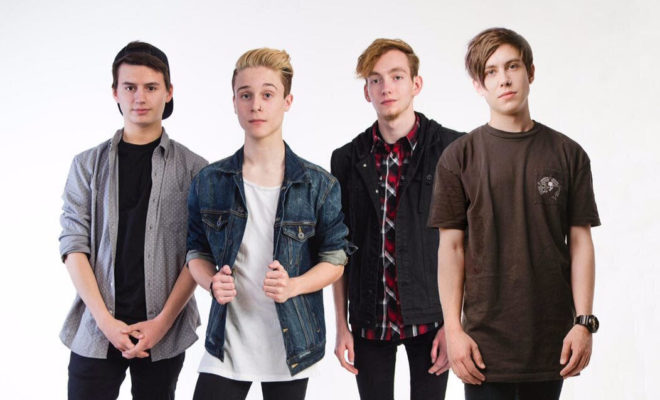 Feature: In Lights is Everything That’s Right About Pop-Punk in 2016

2016 has been a knock-out year for pop-punk releases: Real Friends, Trash Boat, Like Pacific, and With Confidence, just to name a few. But while these releases have had the help of major labels or good press, many bands release new music independently or under smaller labels. Releases from bands like Settle Your Scores, Bonfires, and an upcoming Belmont record may not have been as publicized, but are amazing records as well. Another band that hasn’t seen much press is In Lights, a Cincinnati, OH, pop-punk outfit that released their debut EP, “Running with Scissors” on July 1.

In Lights is a unique blend of pop-punk that blends the sound of Hit The Lights, early The Wonder Years, and All Time Low. With colorful synths, powerful choruses, and tight breakdowns, In Lights may also be the just the band for fans of City Lights, a former pop-punk band also from Ohio. The four-song EP, which is just a taste of their upcoming full-length due out this summer, is more than enough to showcase the potential of this band.

The EP’s title track uses addictive guitar tracks, courtesy of guitarist Ilya Turov. Vocalist Tanner MayDay showcases his unique voice in the choruses, and the breakdown towards the end blends the easy-core staple seamlessly into their sound. On “Turn Tables,” MayDay uses the bridge to show off a subtle nod to classic artists like Frank Sinatra and Tony Bennett, two men of huge influence to the young frontman.

Stage Right Secrets had the chance to speak with Tanner MayDay himself about In Lights and their record, “Running with Scissors.”

SRS: So your guitar played got ahold of you through Facebook. How exactly did the idea for In Lights come from that?
Tanner: He saw some very old covers of mine on YouTube, and basically he messaged me and said they had a full record they wanted me to record, and we narrowed it down to those four tracks.

What’s the deal with Ilya?
Ilya lives in Kazakstan, and we recorded the EP with him there. We’re currently playing in the Midwest right now, and we’re doing everything we can to get Ilya to the States as soon as possible.

So your release mentions that you two brought ideas “from different sides of the spectrum”? How do your influences differ from Ilya’s, and how did that work when you guys were perfecting the songs?
For the most part, we both have a huge love for early ‘00s pop-punk (Sum 41, blink-182). I tried my best to bring influences from Frank Sinatra and Tony Bennett into it as well. I like to bring a lot of weird styles and influences to the table, so we have a unique sound. The Maine and The Summer Set are huge influences on me as well.

In a previous interview, you say that most of the lyrics on the EP were written about you and Isaac’s split in your former band, TillBrightSkies. How did you come to bring him to In Lights, and was it at all weird to have Isaac playing the same songs you wrote about him?
It’s actually really funny because we stopped talking because we both got serious girlfriends. After rotating members around, we needed a guitar player, and I contact Isaac about it. Everything is cool now, and Isaac and his girlfriend are really supportive of all of it.

How was the recording process? What was the best/worst part?
It was just Ilya and I recording the EP. We decided “Running with Scissors” and “Turn Tables” were the best songs to work with first. (Producer) Josh Buckner was a huge help in helping us find our sound; he was very open to our ideas and wouldn’t force us to do anything we didn’t want to do.

What are some themes that you explore in this EP? What do you hope fans get out of it?
I try not to be very generic about it all. I think one thing that really helped me as a kid is that I never really found where I wanted to fit in. Once I found music and went to Warped Tour, you find kids that are so much like you. You come to an In Lights show, and we want to create an environment where you fit in. Hopefully everyone out there is going through something similar and can enjoy listening.

In Lights blends together everything that is making pop-punk a genre to watch this year. Keep an eye out for their upcoming album, and click the links below to keep up with them on Facebook, Twitter, and Instagram.