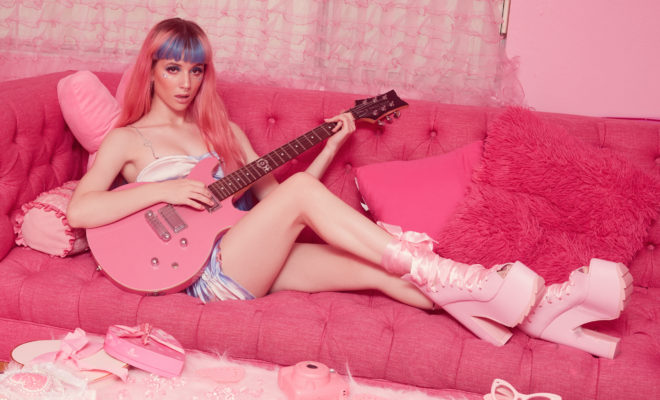 Congrats on your debut EP release! What made you decide to title it Don’t Leave Me?

Thank you! I wanted to call it ‘don’t leave me’ because not only is it my favorite song off the ep, but it’s also the song and title that I felt was most fitting since it captures the whole essence of the entire ep.  Each song is a different expression of emotions that are all influenced by love.

The EP features seven songs, what went into creating the track order?

I wanted the ep to tell a story so i started slow and mysterious with “ashes” which then leads into “happy birthday” and “around”, my two most “bratty” songs. Moving on, i wanted to experiment w my voice and slow it down a bit for “hurts a little less” so i could come back with strong bad bitch vibes in “look up 2 me.” Finally, the last two songs were titled and placed accordingly as my “final thoughts” if you will; don’t bother me, but don’t leave me lol

Was there the hardest track to create or an easiest?

I’d say the easiest were “hurts a little less” and “look up 2 me”, but only because those two were actually written by other artists and all i had to do was lay the vocals on them! Other than those, i’d say the other’s were all equally as hard because i get really into my writing process when I create a song, and i’ll work on writing, organization, and vocals for multiple fullllll days until the song is perfect to me.

For new fans, what song should they listen to first?

I’d say to listen to ‘don’t leave me’ the song, because i think that it represents me the best.

You just performed at Emo Nite what was that experience like?

It was super cool! I’m not old enough to enjoy it to it’s fullest extent (lmao), but I still had lots of fun listening to other artists from the greenroom (also lmao) and meeting lots of cool youtubers and musicians that came thru!! The venue was super chill and vibey too, which is also a plus when it comes to performing.

What can fans expect from a show of yours?

Fans can expect a lot of lit ass music, and a lot of hype and dancing from me & my fellow stage buddy Ben. I also love engaging with my audience so if you come defo expect for me to be all up in your face, especially if youre in the front.

You have had a number of collaborations with other incredibly talented people, how did collaborating with Rocky, CupcakKe and Alexander 23 come about?

I started working with Rocky after he remixed my song and our managers brought us together for our LadyGunn collab! The CupcakKe feature, which was random as fuck but still my greatest accomplishment to date, came about after my manager Angie sent her team the song and asked if she’d be down to lay a verse. I think i met Alexander through my manager as well after we had a session at PJ’s house and continued the song afterward.

Cliche’ question, but do you have any other dream collaborations whether that be a feature, producer, or writer?

I want to work with Diplo so fucking bad because I love his production style so much. Also, there’s countless artists i’d wanna collab with, but i’d say Gerard Way from MCR and tame impala are at the top of my list.

You’re living in LA what is the music scene like for you?

For me, it’s pretty limited still since i’m under 21 & 18, but the music scene here is pretty primarily rap and indie. Warped tour was pretty cool but they ended it last year so now we just have Coachella and Rolling Loud.

Your music is described as alternative pop, do genres matter to you or should they in general?

I think genres matter in some cases, but only as an adjective and not as a whole classification because no artist is primarily just one thing, the way people arent always just one way. Artists live to create and experiment so you should expect that from any musician.

What else can we expect from you this year? Any more live dates?

I think my plan for the rest of the year is to just work on new music and performing whenever and wherever the opportunity arises. I know i’ve already began a new project which will hopefully be finished in the fall, and i also believe that I might be joining a tour or two for a few dates, but nothing’s solid yet. Other than that, my next performance is 5/18 at Madam Siam