The Lightning Thief – The Percy Jackson Musical is based on the hit book series that has been made into hit films and is now a mega-hit musical! We got the pleasure to speak with James Hayden Rodriguez who is currently playing Luke on Broadway!

Congratulations on making your Broadway debut! Has there been anything that surprised you so far?
Thank you! It has been so exciting. I would say there is a certain pressure and weight that comes with being a BROADWAY show! There is an expectation to be perfect. This is the height of our industry and New York audiences expect a lot, so when you go out there, you better give nothing short of excellence. This was surprising to me because I’ve done the show for two years, so I thought it would just be the same. And maybe it’s something I’ve created in my head, but I can definitely tell the energy of everyone on our team has become much more focused and serious. We are now part of a very important legacy and we just want to do our best.

You’ve already played the role of Luke, Off-Broadway and on tour. How do you keep it fresh every night?
It’s actually still really exciting for me to play Luke every day. I love making new discoveries about his character and seeing how it informs my performance. It doesn’t get old for me. We are also such a tight group of friends so we really have an amazing time on stage together. The relationships of our characters are still developing so there is always something new happening between each of us. I think the trick is being as in-touch with your character as possible so you can then forget about all the work you’ve done and just live truthfully in the moment. That’s when the best discoveries happen and how it stays fresh.

What are the main differences performing on Broadway to Off-Broadway to touring?
Off-Broadway was such a different production. It was so scrappy and we were in a tiny theater. There was something that felt so underground about it. It was almost like a proof of concept. Tour was when we really got to dig deep and find the most effective way to tell this story. It’s when the show got REALLY good. Touring is crazy because you’re doing eight shows a week, but you’re also traveling a lot, and no one ever tells you how physically taxing doing both is. As for Broadway, I like to think of our show as a beautifully aged Cabernet now and we are ready to be consumed!

How did you originally prepare for the role? Were you a fan of the novels and films?
I had never heard of either! My agent sent me the script and I thought, “Oh, this looks cool!” When I started rehearsals I began to understand how big of a world Percy Jackson is. Once I realized there was a whole book series and fandom behind it, I was so excited to dive in and learn more. I went straight to the source material, the first book in the series and started there. I learned as much about my character from that book and started filling in the blanks with my own personality and experiences. Then I worked on finding the perfect blend of both.

How do you relate to Luke?
Luke is the antagonist of our story, but he is not inherently evil, which makes him a very interesting “villain.” He is someone who struggles with making the right decisions. He is led by his resentment for his father. It has a strong effect on his character and his journey. I relate to that. My father wasn’t around when I was growing up and I hated him for that. My mother and I struggled and I blamed him for that. We didn’t speak for about seven years at one point. There was so much I didn’t learn that I thought a father was supposed to teach a son, and I felt cheated. Now I’m a little older, a little wiser, and understand a little better the reasons for his absence, but as a 19-year-old kid, our lack of relationship had a huge effect on me. I try to infuse as much of that anger and emotion as I can into the character of Luke.

What do you hope the audience takes away from the show?
I hope young people feel empowered after watching our show. We live in a crazy world right now and it is time for action. Kids are starting to take a bigger role in effecting change and we want to encourage it. We are inspired by the kids at Marjory Stoneman Douglas High School who marched for stricter gun control after a mass shooting in Parkland, Florida. We are inspired by Greta Thunberg and all the kids who protested against the lack of action on climate issues. These are kids that are fighting for the world they want to live in. That’s what “Bring on the Monsters” is all about. “We can fail, but we have to try.” It’s about taking action against the evil forces at play. It’s about fighting for the world you want to live in. 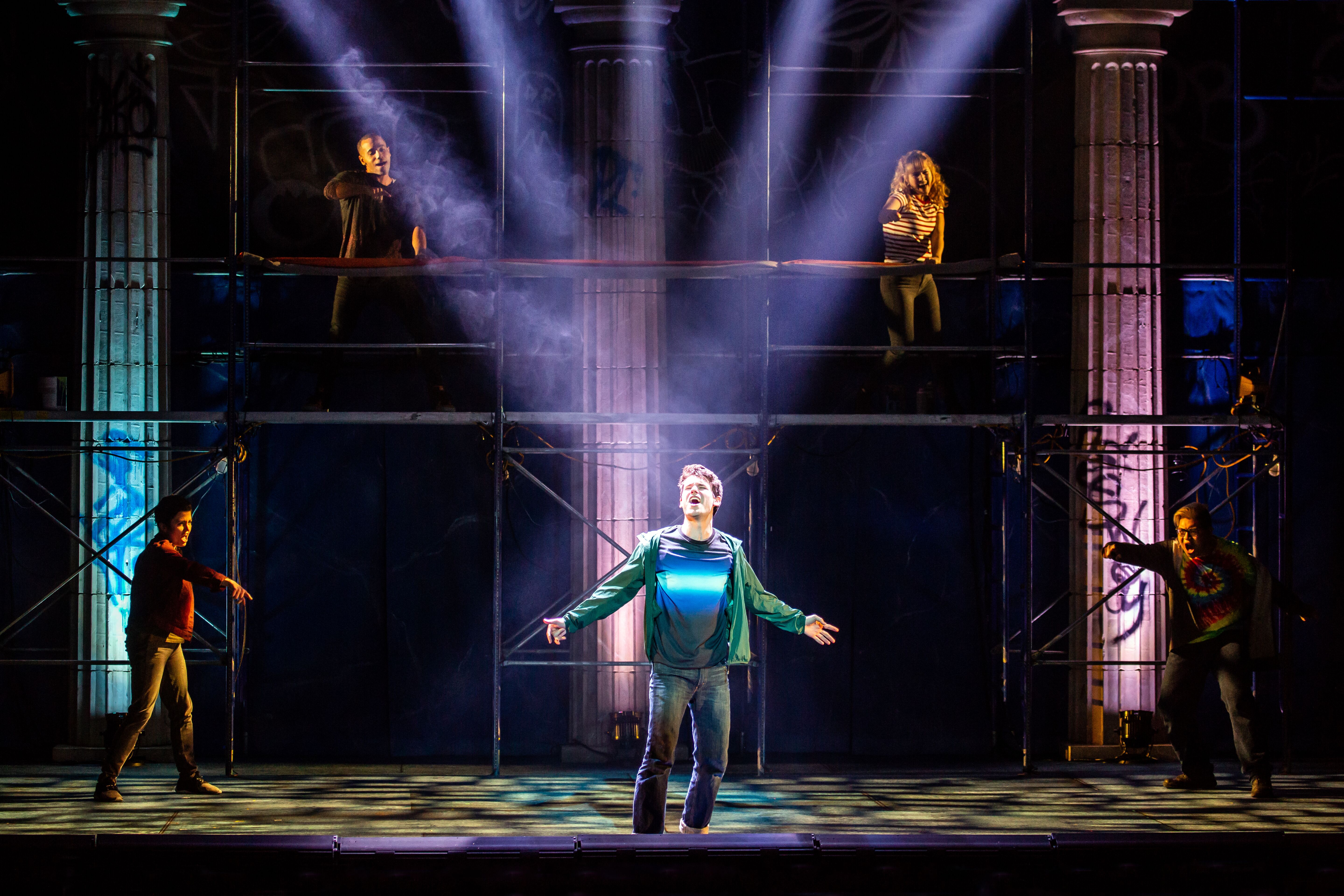 Do you have any fun fan stories so far?
We are so fortunate to have such a huge, die-hard fan base. They give us everything from blue food (you’ll have to watch the show to understand that), to knit dolls of our characters, to customized jewelry, to specialty Lightning Thief merchandise! Our favorite is getting fan art of us and our characters.

If you went to Camp Half-Blood, what cabin would you want to be in and what activities would you want to participate in?
Good question! I like to think I am a true son of Hermes, our “jack of all trades” God, so I would be living in Cabin 11. I would spend most of my time sparring with my sword and being excellent at Capture The Flag. I would also spend a lot of time in the air with my flying shoes!

Visit Camp Half-Blood for yourself, get your tickets HERE!