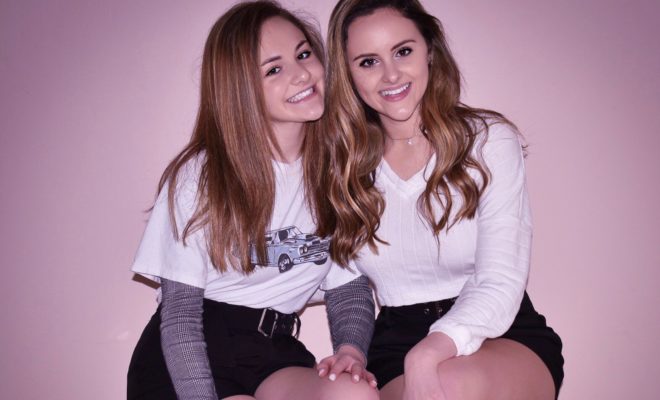 Teen sisters Kelli and Kayla Iutzwig, a.k.a. Wild Fire, have wowed audiences in their Houston hometown and beyond with their youthful energy, deft songwriting and expressive singing. In just three years, the duo has won numerous distinctions, including First Prize, Female Vocalist of the Year in the Young Adult category at the Josie Music Awards. Proclaimed “one of the best up-and-coming young artist duos” by the Texas Country Music Association, Wild Fire’s new EP Been There. recently dropped this April.

What was the filming process like?
We had an amazing time filming the music video for Billboard Sign! This was our first professional music video so we did not fully know what to expect. We worked with Director David Nguyen of Ox Pictures. David has done some amazing work in the past with artists such as Travis Scott, Nelly, Dj Steve Aoki and many more. David has an incredible vision and knows exactly what is needed to turn that vision into a stunning production.

For Billboard Sign, we wanted to have a location where we could film both a performance scene and a High School dance scene. We chose one of the most iconic music venues in Texas: Dosey Doe, located in Spring, Texas to film the video for Billboard Sign. The 165 year old building was actually a tobacco barn transported here from Kentucky. It has excellent acoustics and has hosted nationally recognized artists such as Dave Mason, Clint Black, Leon Russell, Mel Tillis, Steve Wariner, Kenny G and many more.

When we arrived on set, the film crew was unloading a huge truck full of equipment. We met with David to discuss how things would flow during the 12-hour day. After our meeting with David we had our hair and makeup done by some amazing women who are now great friends of ours – Kiana Borth and Tabitha Huerta. After a couple hours the camera crew had everything ready and we filmed the performance scene. That took about three hours and it was time to break for lunch. During the second half of the day we filmed the high-school dance scene. It was amazing to see how David and his crew transformed the venue into the scene of a high-school dance.

What inspired the video?
The video was inspired by the lyrics and meaning behind our song Billboard Sign. We wrote the song with hit songwriters Shane Stevens and Maria Christensen. The song delves into the relationship of two people who know they have feelings for each other. The guy, however, will not admit it and put a label on their relationship to make it official.

The lyrics are from the girl’s perspective. She is basically saying that everyone knows you are into me, so stop trying to hide it and just tell the world how you feel. We all felt this topic was super relatable, especially for teens that experience situations like this all the time.

When we met with David to discuss ideas for the video, he felt that a great way to make the video relatable to teens would be to include a high school dance scene. We knew we wanted a performance scene as well, so we had a solid strategy set going into the filming process.

What were some of your favorite parts of this experience?
Our favorite part of the video was the performance scene. The audience was super hyped and it made it feel like a real show. We love live performances so much that this part was really special. We also loved meeting and getting to know the owners of Dosey Doe, Steve and Joan Said. They had some very interesting stories about the venue and were so kind and welcoming. We were even invited to perform there recently, opening for the Texas Tenors.

We also enjoyed having our friends participate in the video, such as Noelle Lavacca (our best friend since age 3), Mia DeSalos a great friend (bass player in the performance scene and our actual bass player for Wild Fire) and Craig Buyajain a great friend (Kelli’s love interest in the video). We also met lots of new friends in the video such as Tory Perrard that we still keep in touch with to this day.