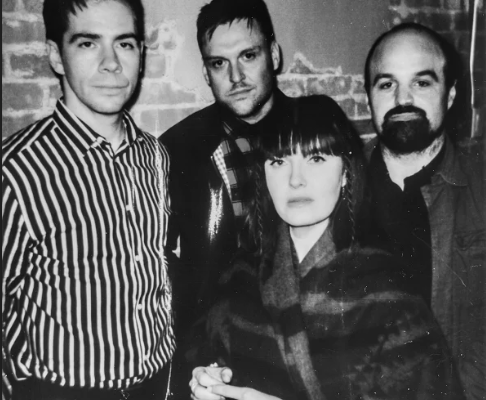 Isolation will drive you crazy.

At the literal end of a quiet, winding country road in Dunnville, Ontario—the kind shared with foxes, windmills, and little else—sits Mechanical Noise Studio. It is the picture of isolation.

This is the studio of Mitch Bowden. His band is called Don Vail. Don Vail is he. For a decade, Mitch, Mechanical Noise, and Don Vail have blurred into a synonymous thing. With the person and the means and the moniker intertwined—and isolated from all distractions—anything has been possible.

Fully self-recorded and mainly self-performed, 2016’s Fades was a beautifully realized reduction of Bowden’s melodic craftsmanship. But it also couldn’t hide the effects that isolation can have upon an artist—so much personal control and mastery countered equally by a near-choking perfectionism and lack of urgency. It was the sort of release that begged for the crack of a whip. And Bowden was about to get one.

In the spring of 2017, Don Vail received a fortuitous invitation. Concise as it was, Fades displayed more than enough promise to secure a stay at Grouse Lodge Studios, Ireland. But there was a catch—the window was not open indefinitely. Don Vail had only a matter of weeks to turn scattered shards of maybes into actual songs.

Don Vail needed to be more than Mitch Bowden.

Enlisting longtime drummer Victor Malang, as well as guitarist Matthew Fleming and keyboardist/vocalist Kori Pop, Bowden finally had the impetus to break his isolation. The freshly formed quartet rehearsed with relish, all of those expectant seeds quickly catching root in the verdant soil. Grouse Lodge, with its new faces and ancient energies, would not be an opportunity wasted.

That Stand Of Tide wasn’t finished in Ireland hardly matters. Sure, Bowden returned to Mechanical Noise to complete the sessions in much the same manner that he always had. But the overseas journey had turned something vital. Now the some day when shit would get done was today.

Compared to the controlled brevity of Fades, Stand Of Tide is an onrushing wave of generosity. Its 13 songs cascade forth with kaleidoscopic tonality—recalling in equal measure the effortless hooks of Guided By Voices, the arrangement acumen of Jon Brion, and the awe and melancholy of Figure 8-era Elliott Smith. It’s the kind of record that that can only be made by an exacting talent—one who at this point has had the time to puzzle over every last inch of his process.

Put all our plans away, sings Bowden on the title track. They only serve to stop motion.

Creative isolation—with its refinement, its process, its planning—can serve a purpose.

Don Vail has no use for it anymore.

“It’s hard to say what the initial inspiration for it was, but I remember the general structure coming together quickly (like, in one sitting), which is rare for us. I had a cheap old guitar in an oddball tuning and just kind hammered out 3 parts that happened to work well together. The lyrics came later, after a lengthy swim through the sewer of popular culture. The song, like the rest of the record, was self-produced. We took the demo session to Ireland where we re-tracked the drums and bass at Grouse Lodge with Cameron Craig. The two weeks we spent there felt like a dream. Grouse Lodge is this magical place with a studio and multiple living areas in these beautiful 300-year-old stone buildings surrounded by rolling green hills. We met so many amazing people there and I still have dreams about that place all the time.

By the end of it, we had worked on ten songs at Grouse, which were all in various stages of completion. Of those ten, I think eight made the record. This song kind of sat on a shelf after Ireland. We only had chorus vocals at that point, and it wasn’t until the rest of the record was mixed that this one came together.”