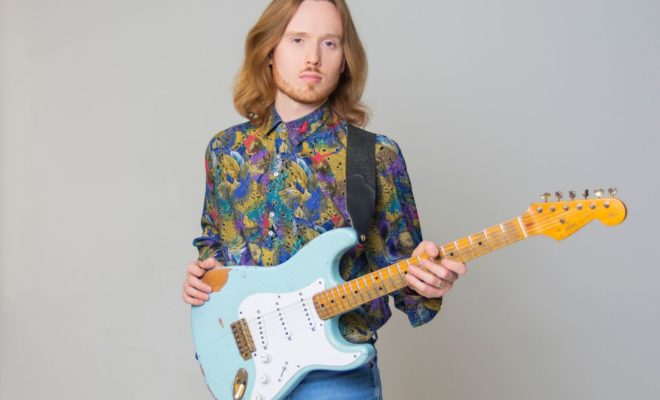 Ben is a NYC-based, Australia-born guitarist, setting up to release his new single “Growing Pains,” from his debut, instrumental solo album, ACE, due out this Summer on Ocean Road Sounds. In tune with the album, the track combines influences of jazz, blues, R&B, and prog into Eunson’s own complex flavor of rock music. After an illustrious career as a guitarist performing and recording with acclaimed artists, including John Legend (NBC’s Christmas Tree Lighting at Rockefeller Center), Lalah Hathaway (Lalah Hathaway Live release show), Queen Latifah, Dave Chappelle (“Controlled Danger” Concert in NYC), and more, Ben Eunson is fully equipped to take his own spotlight with his distinct guitar stylings.

What is the story behind your latest single?
My new single “Growing Pains” is an allusion to tension that can arise during the creative process. While tension between everyone involved can sometimes create difficulties, I believe that differences of creative opinion that are coherently joined together can add to the uniqueness of a musical statement. We recorded the song mostly live in the studio, with myself on electric/acoustic guitar and guitar synthesizers, Alexander Claffy on Bass, and Kush Abadey on Drums.

When did you realize music was your calling?
I knew from very early on that music was my calling. I played piano and violin as a child, but after hearing Andy Summers with The Police, and various George Benson LPs at home when I was 10, I started thinking about the guitar. As soon as I picked up my Dad’s old guitar, there was no looking back.

How would you best describe your sound?
In a way, my style probably falls somewhere in between the styles of those two guitarists I just mentioned hearing when I was very young. In the end there are many influences, but to describe my sound – there are definite elements of improvisational language coming from Jazz, but overall my sound is a culmination of all of the various musical styles I’ve been involved with throughout my life.

What do you hope listeners take away from your music?
I hope that people can take away a sense of who I am musically, get a better sense of my style as a guitarist and and also get a hint of what is to come from my upcoming album, “ACE”.

Who are your dream collaborators?
It would be a dream to collaborate with Pat Metheny. The strength of his musical vision, and the notion of strong musical identity that is inherent in his playing and music has probably had more impact upon me than anyone else.

Is there a possibility to perform your new music live?
Absolutely, we’ll be playing music from my upcoming album throughout the summer and fall.

What are some albums that really shaped you as an artist?
There’s a wide range of albums that shaped me as an artist. To name a few, I would have to say Steely Dan – Aja, John Coltrane – Coltrane’s Sound, the first Pat Metheny Group album, Donald Fagen – The Nightfly, Eberhard Weber – The Following Morning, Keith Jarrett – Sun Bear Concerts, Brian Blade Fellowship – Season Of Changes, Joni Mitchell – Chalk Mark in a Rainstorm, Ralph Towner – Blue Sun, Christopher Cross’ first album, The Police – Synchronicity, and so many more!

What are some of your contenders for best song of 2019?
I’ve heard a bunch of great songs throughout 2019 so far. I checked out Robben Ford’s new album “Purple House” earlier this year – great songwriting and playing, especially the songs “Bound For Glory” and “Wild Honey”. I think it might even be his best album.

Related ItemsBen Eunson
Giselle
← Previous Story Exclusive Premiere: Kyan Palmer + Nicopop “What U Like”
Next Story → Our Exclusive Chat With Be The Bear