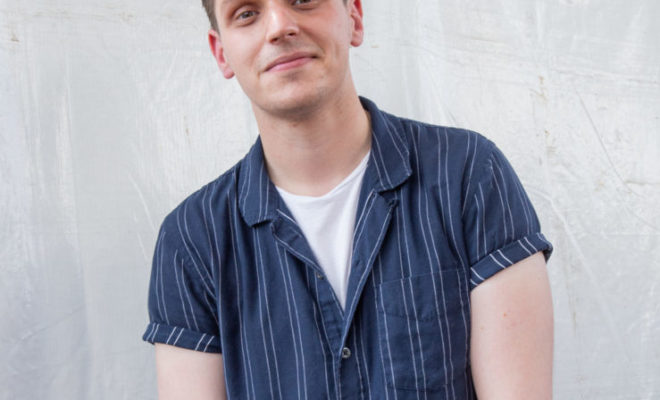 We took a break from the festival to sit down for an interview with Nashville-based singer, songwriter, and guitarist Patrick Droney who was performing on the BMI stage at the festival.

Get to know more about the bluesy pop singer, songwriter.

How did you get your start playing music?

My father is a guitar player, and I just grew up with him playing around the house. And you know, I was like six years old, and I heard him playing some BB King and Eric Clapton. I was like, I want to do that. I’ve never stopped.

Who were your musical influences growing up?

Yeah, it’s kind of two parts. I was just a guitar nut, so you know, BB King, Freddie King, Albert King, Robert Johnson. But at the same time, I was inspired by the songwriters- Bruce Springsteen, Joni Mitchell, James Taylor. I figured out early on I wanted to play guitar, but I also wanted to say something. That is what shaped what I’m doing now.

Tell us more about your EP

The EP came out last August, and it’s been an incredible year of watching people discover it.  I found my fans and my community through that EP. It was really a 15-year journey to “the beginning.” That EP is so special to me because it took all of my experiences from the last 10 years, and I was able to finally realize my true voice in this experience. I moved to Nashville three years ago, so that really influenced my songwriting. We wake up every day and write songs- that’s the way of life for Nashville.  To be able to articulate all my experiences with the Nashville community was a huge part of creating the EP. I co-produced the record with Ian Fitchuk. Ian’s had an incredible year with the Kacey Musgraves record. We just went in like a couple of buddies to have a lot of fun, and this thing kind of came up out of thin air.

What is your favorite song of the EP

I think my favorite song is “Stand and Deliver.”  That song is so special to me. I lived with a family in Los Angeles who became my second family. Their father passed away, and it was a time where I just didn’t really know how to help. I wrote that song for them. People need to know that they’re not alone. Even if you feel like you can’t do anything, your presence and the knowledge that the intention is there helps. That was my way of making sense of that loss. And then for me, I’ve experienced loss, everybody has, so it’s become a beautiful thing watching people respond to that song.  I was also able to play it on Late Night last year, so that was an amazing experience.

Yeah, it’s going to be a lot of new music in the new year. So it’s been a good long year of writing this new project and recording a bunch, but I’m ready to get some stuff out there and it’s coming out soon.