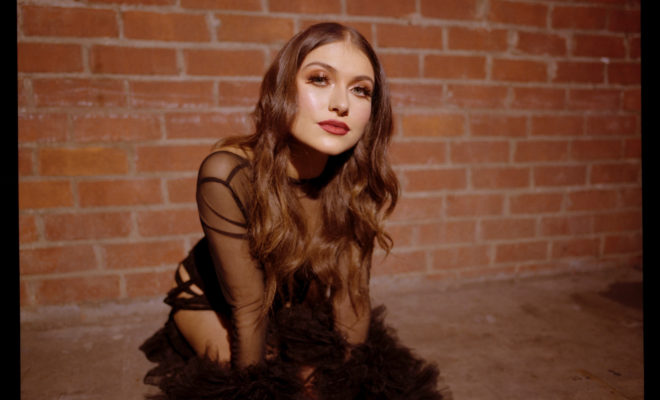 Twenty-year-old Elle Winter is bound to be one of the biggest break-out stars of 2020. The native New Yorker just released her debut EP on March 6 that is all about female empowerment. She has a deal with Sony music, acting credits under her belt and is an Ivy League college student as well. Watch out because if you think this gal will slow down, the answer is “yeah, no”.

Congratulations on your debut EP! Has there been anything in the process of writing and recording that surprised you?
Thank you! Creating this project was definitely an eye-opening and transformative experience. I learned a lot about myself and pushed myself to be as open and honest in the creative process. The theme of the project is empowerment, and I realized through the making of it that empowerment can not only be found in the anthemic songs of self-expression and independence, but also in the songs that touch on vulnerable and challenging experiences. I learned that embracing who I am and my experiences are powerful too.

What do you hope listeners take away from the EP?
I hope listeners walk away feeling empowered and a sense of solidarity with me, we are all in this together and hopefully connect through shared feelings and experiences.

The song “Yeah, No” is all about female empowerment. What’s the story behind the song?
I wrote “Yeah, No” after a break up where my ex would keep calling me to make sure I was “ok.” I was surprised and annoyed by the condescending calls, realizing this person could not have really known me if he could think I was home pining over him and missing someone who was not the best person for me. So “Yeah, No” is what I like to call my mic drop song, basically to all those exes out there that think we still need them… “Yeah, No” we don’t.

So the EP is amazing but can we expect an LP on the horizon?
Yes! I was just in Sweden for most of January writing and recording new music and have made the move to LA to work on my debut album!

You co-wrote all the songs on your EP. Do you recall the first song you ever wrote and what it was about?
The first full song I wrote was called “Awkward” about a boy I liked in 4th grade! I performed it at the school talent show and burned CDs of it to distribute to the ENTIRE school haha!

Could you tell us the story of how you got discovered by Disney?
I had taken an acting course at age 7 in NYC which had an end-of-term showcase where industry execs would come. This lead me to sign with my first agent, and after doing various projects in NYC, I met with Disney at age 12.

I only wear black and red now #YeahNo

You performed with huge names in 2019. Is there an opportunity to perform these new songs live coming up?
Yes! Hopefully, during the summer or fall, I will embark on a tour!

What are your favorite New York City hot spots?
I’m really in love with this healthy and delicious spot called Broken Coconut! They have amazing bowls and matcha teas, and last week I waited in line with Gigi Hadid, so I guess it is definitely a hot spot!

Related ItemsElle Winter
Giselle
← Previous Story Liddy Clark covers “New Rules” for Turn Her Up
Next Story → Exclusive: Independent Vinyl Manufacturers Unite To Stand Up For The Craft of Vinyl