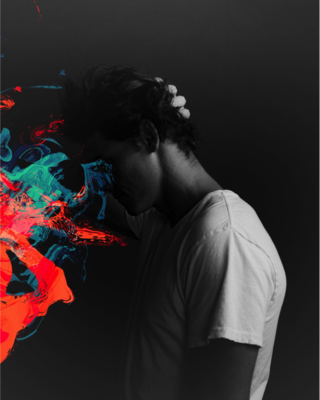 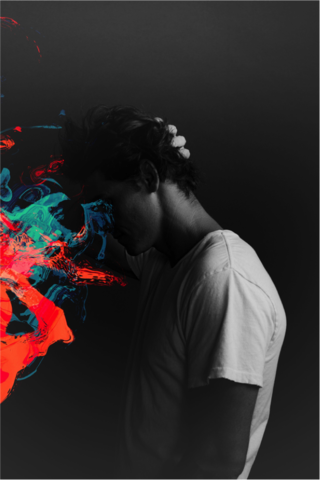 Stage Right Secrets sat down with Curtis Lowe. Curtis Lowe is a new electronic music project from NYC-based producer Conor Cook.  The debut EP, Sad Bangers Vol. 1 debuted January 18th to rave reviews. The EP was produced by Cook, who also plays guitar on every track. The songs were all co-written by Cook and the featured vocalists. The record includes collaborations with vocalist Naomi Wild, RCA artist TOMI, Ben Duffy of the UK band Fenech–Soler, and James King of Fitz and the Tantrums.

Congrats on your first EP! What went into your EP’s artwork?

The album art was designed by Leif Podhajsky.  I had been a fan of Leif’s work for artists like Tame Impala and Foals for years.  I had an idea of the aesthetic I wanted for this project. Initially, I sent Leif a folder of album covers and photos I liked from the 1970’s to today in addition to the music on the EP. Leif created a bunch of designs around those themes until we found one that clicked.  It took us about two months of going back and forth until we agreed on the final artwork. I’m really happy about the end result.

What role do you want visuals to play with your music?

Was there a specific process to choose the track order?

The track order I chose just felt right, that’s honestly all there was to that!  It wasn’t too tough as there were only three tracks.

You’re based in NYC and this EP was recorded in NYC and LA, do you think either city or your location when you write/record influences your music?

My surroundings definitely had an impact.  When I was in NYC, I was pretty much always working alone in my apartment.  When I was in LA I was collaborating a lot with other musicians, so that obviously had a big impact.  I was also carrying these songs around with me for months on my laptop and chipping away at them. I’d work on them at home but also on planes and in hotel rooms when I was touring.

In June I was on tour in San Francisco and I was feeling like the songs were close to being complete.  We played a great sold out show that night but when we came down to the van the next morning, all the windows were smashed out.  My laptop and hard drive with these songs on them were gone and I didn’t have backups. I was completely devastated. I spent 12 hours walking around the streets of SF talking to crack heads, going into pawn shops, looking everywhere for my stuff.  I was thinking through every one of the thousands of productions decisions that went into these tracks and wondering how I could ever recreate everything. Miraculously the cops called me a few days later. They had arrested a homeless guy who had crashed his Bird Scooter into an old man.  He had my hard drive in his backpack which they sent back to me. It was an emotional couple of days as you can imagine.

The music has hints from other genres and sub-genres from electronic music, do genres matter to you? Should genres matter in general?

As far as my own personal tastes go, I bounce around every genre and every era.

Genre lines are pretty blurred these days and I’m no exception.  I play in an alternative rock band and I enjoy loads of different electronic artists, so I’m always pulling bits of influence from all of these areas.  That said, I wanted to keep some classic / 90’s house elements at the core of this project. There is so much electronic music out there today which I love and a lot that I think it quite sleazy and generic sounding.  I tried to keep the classy elements in and the cheesy elements out. Having some genre focus can help establish common threads and help make production decisions easier. There’s a lot of sonic choices that I try to repeat across all my songs, but they come from a variety of different genres.

You wrote and produced the entirety of the EP, how did your talent for songwriting and producing come about?

As for the writing, the songs were co-written with the artists who are featured on the EP (Ben Duffy, TOMI, Naomi Wild).  The music and the production was handled by me. My skills developed over the last few years through being a member of the band VHS Collection.  We’ve written hundreds of songs at this point, so I guess you just get better at it with practice. On the production side, VHS has been fortunate to work with some really top notch producers and I picked up a ton from looking over those guys’ shoulders.  Then of course, I’ve just spent most of my time over the last few years making tracks in my room in Logic. I watch a lot of production and mixing Youtube videos too. My skills have improved a lot but I still feel like I have a lot to learn. The majority of the music I make still isn’t good enough to be released.

A lot more music.  I’ve been writing with some really talented friends and artists out in LA the last few months.  I have about 20 new songs written and I’m now working on the productions. I’m trying to continue releasing singles through the summer.  There will be a mix of electronic leaning pop songs and some deeper / longer tracks as well. Stay tuned and thanks for supporting me.