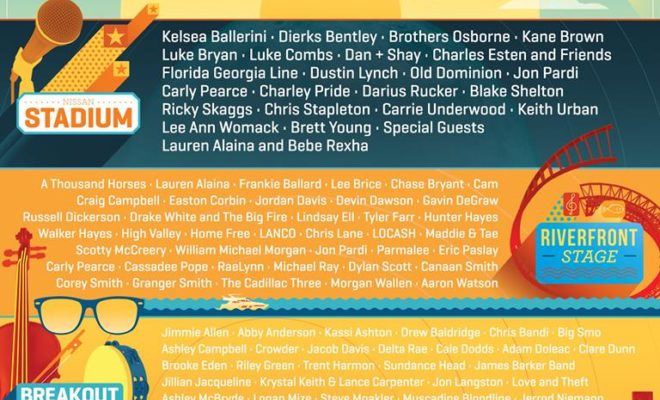 Outdoor daytime performances at Budweiser Forever Country, Riverfront and Breakout stages are free and open to the public. All artist lineups are subject to change.

Guided by the generosity of the Country Music community, proceeds from CMA Fest are used to drive the CMA Foundation’s mission of enriching and sustaining music education programs. Through strategic partnerships, professional development and grant distribution, the CMA Foundation, a nonprofit 501(c)(3), has invested over $20 million in 85 programs across the national public school system, after school programs, summer camps and with community outreach organizations.

Additional stage lineups, Fan Fair X activities, and more will be announced in the coming weeks. Don’t miss a beat—get connected with CMA on CMAfest.com, Facebook, Twitter, Instagram, YouTube, and sign up for CMA Country Connectionemails to receive the latest news as soon as it’s announced.

CMA Fest will once again be filmed for a three-hour national television special to air on the ABC Television Network. This is the 15th consecutive year the festival has been filmed for a broadcast event.