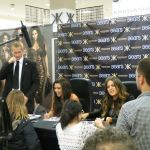 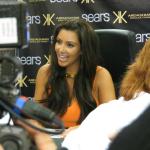 Arriving late to Sears on April 20th due to traffic caused by a group of sisters, I saw thousands of people wrapped around one of the United States’ biggest malls.  Walking inside Sears I have NEVER seen so much security and police in my entire life.  You’d think the president was there!  Fans waited outside the day before and slept on the concrete in the Chicago windchill to get an autograph from Khloe and Kim Kardashian.  The girls along with their mother Kris were in Schaumburg, Illinois at the Woodfield Mall in Sears to promote their new clothing line, the Kardashian Kollection. The kollection itself is very cute, fashionable, and comfy.  The fans that did not get wristbands to meet the girls waited hours just to get a glimpse of the famous sisters.

I had my preconceived notions on the girls with the tabloids and rumors but seeing that they genuinely cared about all of the girls and guys that waited for them was refreshing.  Multiple times the girls waved to the fans that did not have a meet and greet with them and repeatedly said how much they appreciated and loved them.  Despite the security the girls even hugged crying fans and took the time to talk to everyone they signed for.  These sisters are slowly taking over the world watch out for them and be sure to check out their new line available at Sears.