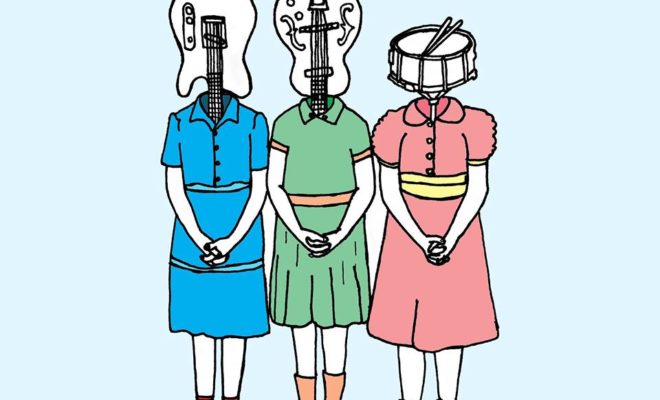 Have you ever seen the tumblr edits of Disney princesses as normal young ladies of this day and age – leggings with boots, over-the-shoulder bags with tattoos, or jeans and crop tops with flower crowns? Have you ever wondered what they sound like?

The Just Luckies, an all-girl folk/rock/pop band from Chicago, are exactly what I think of when I see those edits. The group originated with guitarist/vocalist KC Weldon and drummer/vocalist Shea Briggs. In August 2014 they released their first EP, Red, White, and Bruised, with songs Weldon and Briggs wrote together regarding relationships and growing up as well as their stance on both personal and political issues.

Their first full-length album, Same Kids, Same Things, has just been released and features 11 tracks of smooth vibes and catchy melodies.  The girls’ perspective of personal and political issues is still a theme in this album as it was with their first EP. This time, however, comes with the addition of lead guitarist Alex Williams. The combination of these three women and their lyrics on adolescence and adulthood brings a record that sounds unlike most of their genre. Don’t just think of them as little girls with little voices – they’re writing and recording music that’s relatable and haunting all at the same time. Stand out tracks include “Summer Clothes” and “Illinois Boy”, both being memorable in lyrics and charismatic in theme.

Same Kids, Same Things can be found on iTunes or streamed on Spotify.