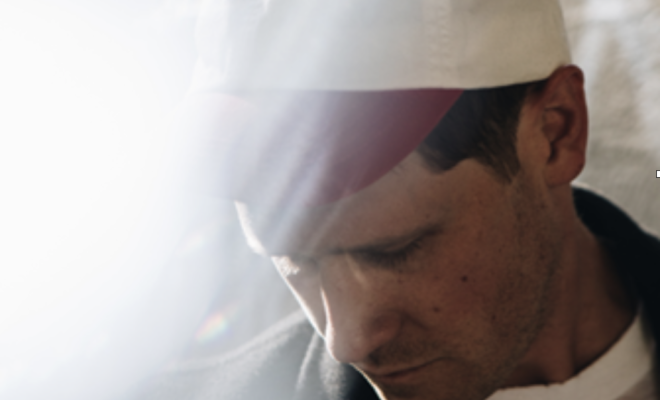 Stage Right Secrets spoke with Ted When about his latest release, “Edge Off,” and what’s to come. Read our exclusive Q&A, below.

Congrats on your debut single! Where were you when you had the idea for “Edge Off”?

I was at my apartment in LA messing around with a Casio SA-20 Keyboard drum loop and running it through a lot of filters in Logic when the topline melody came to me.

The single art and visualizer are absolutely stunning, how did the concepts come about?

Lately I have been drawn to mixed media surreal collage art. I discovered an artist named Philipp Igumnov and reached out to him to possibly work together. I told him the concept of the song being insomnia, substance abuse and the desire to self-medicate and we worked together to create the final image. The visualizer was done by a brilliant painter, illustrator and visual artist based in Milan named Giuseppe Ragazzini. Drawing inspiration from the record he produced the stunning piece.

Will visuals play an important role in your music? What inspires you visually?

Absolutely. Art and my music go hand in hand to complete an expression which transcends language. I hope to work with many different artists I’m inspired by to take the songs to the next level. I love many different styles of art and sculpture. I am drawn to images in nature, structures and biology. I also like when images can be combined to create a surreal landscape that otherwise could never exist like Philipp did with the single art for “Edge Off.”

You have an EP in the works, how far along in the process are you?

The EP is finished and we are working on nailing a release date down soon.

How do you go about choosing which tracks will make the cut and the tracklisting/order of the songs?

I usually know very soon whether the song will ever be heard. If I wake up in the morning and the song I recorded the night before does not make me feel then I usually start working on something else, but if i wake up the next day and can’t put it down and it sounds better than the night before, that’s when I know we should finish the track. The hard part is actually knowing when a song is finished because I always feel like i could add more.

Do you have a favorite line or lyric off of the EP?

“Sometimes I try to be myself / Sometimes I feel like someone else / Now, I don’t feel like being anyone at all.”  This lyric is from a song called “Don’t Feel Like Feeling” on the EP. I like it because it simply states the desire to be unconscious for a while and not feel anything when things can be too overwhelming.

Taking it back, what first drew you to songwriting and production?

When I was around 10 years old I found an unstrung classical guitar in my parents’ attic and I asked my dad to string it. I would sit long nights on the garage roof learning to play simple melodies that over time grew into songs. Then as I got older in high school we used to throw bonfire parties out in the country and the guitar became the source of entertainment where all my friends would get together and we would make up songs. We’d also drive around smoking weed, listening to rap music and freestyling. As silly as it was, I think we learned a lot about how to compose lyrics that way.

Was there a specific moment when you realized that you wanted to make music your full-time focus?

Yes. After I graduated from college I reconnected with an old friend in Northern Michigan, he was in a band called Pnuma Trio and I had been writing and recording songs in Northern Montana. He heard me play these songs at a party and invited me over the next day to record with him. We continued to work together at a distance until he invited me to join him at Timbaland’s studio in Virginia Beach. I stayed with him for a week and flew back home to Minneapolis and as I got off the plane it was -20 degrees and I knew I wasn’t going to live there anymore and I had to make the plunge into full time music and move permanently to VA Beach.

Since most of the world is in quarantine what have you been up to in your free time?

I have been writing a lot and recording at home in Nashville. I have tried to also get outside as much as possible, going on long bike rides, gardening and growing produce. I have also gotten to read more and watch movies in the downtime as well as try my hand at collage art. Since I have also been home so much we have been fostering a dog through the Nashville Humane Society’s foster program which has been a really cool experience. We got an older dog who came from a bad hoarding case so over the last month we have seen her come into her own and start healing.

I was asked to make a few playlists for YouTube which forced me to seek out new music from friends, you can find one of them here. I also recently rediscovered Matthew Dear’s song “Deserter,” Arthur Russell’s song “Wild Combination” and “This Is How We Walk on the Moon.”