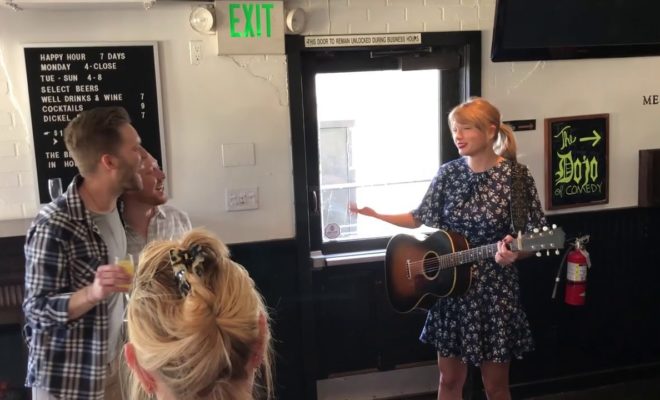 Good luck to every other future fiancee out there, Alex Goldschmidt has set the bar high having Taylor Swift perform him and his fiancee Ross’ favorite song less than an hour after he proposed to him. You may recognize Alex as one of the fans that are featured in Taylor Swift’s music video for “Shake It Off.” He’s also pretty hilarious on Twitter and you should be following him if you’re not already.

Swift showed up looking like a Red-era version of herself with her iconic red lips and acoustic guitar to perform an impromptu version of “King of My Heart.” Watch Alex’s video above to see how it all went down!

In conclusion, nobody will ever reach this level of an engagement surprise and romance and Taylor Swift is a queen. Congrats to the happy couple! Ross we hope you’re not too in shock from the surprise engagement, to surprise party, to surprise it’s Taylor Swift.