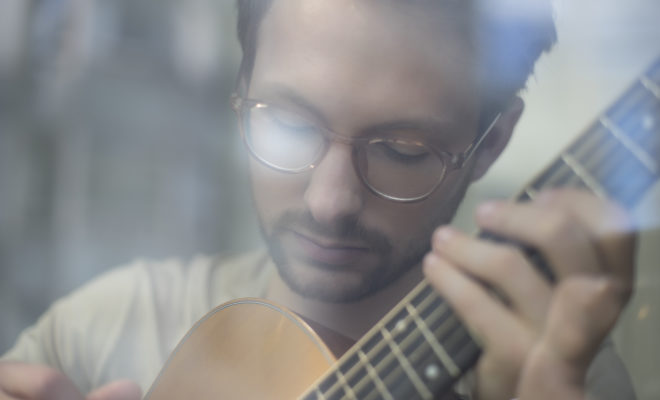 Taylor Mathews has conquered America’s Got Talent, got a new single out in 24 hours and a new EP in two weeks. So, we kinda, sorta had a whole lot to talk about.

SRS: What can you tell us about your EP “Thales”?

TM: “The most difficult thing in life is to know yourself.” – A quote from the philosopher Thales. That sums up this entire EP for me, it’s a bit of an unmasking of who I am. I’ve struggled with perfection and this EP is, in a small way, a representation of the little ugly truths we come to find out about ourselves and how we process them. Specifically for me I find I struggle with caring about relationships too strongly at face value. I’ve had to unpack a few things in myself over the last few years so, ultimately, I gave this record the name “Thales” to memorialize this coming of age emotion I’ve discovered and I’m continuing to discover in knowing myself. This is the start of some real and broken and sizable truths.

SRS:  Your latest single “shallowman” is killing it on Spotify! What is the story behind the song?

TM: Ah! Wow, thanks. It definitely seems to have gotten some love so far and I hope the message of the song is punching some hearts where they need it. To tell you the truth, I haven’t heard many songs start a conversation like this one does after a show. People are genuinely concerned for my well being and I think it’s great because it shows that people are empathizing with it. What’s even more curious about that is that there is no empathy without some sort of understanding of the situation. To truly feel someone’s pain you have to, in a sense, have lived it or known someone that has gone through something similar and be reminded of that heartache. This song meets people in a very broken and, sometimes, misunderstood place that I feel has connected me more to others than most of my other songs.

It’s just a real song about a real relationship I’m in and continuing to learn and grow in. It’s scary loving someone and finding out you’re not always the hero of your own story and there are some things you just can’t battle on your own.

SRS:  Will a music video be released?

TM: Actually the music video was JUST released recently! Go check it. It’s emotional and my mom was very worried watching it.

SRS: We heard you’re planning to release another single “Run Like Hell” soon. Can you tell us anything about it? How is it different compared to “shallowman”?

TM:  “Run Like Hell” has been a song in the shadows for me for the past couple years. It only resurfaced when we were talking about this EP. It’s all based around a similar time period and state of mind. You’ll notice that with the opening lines “I’m so good about making me feel so bad [about myself]…” that it’s the common theme of this EP and what’s to come on the full length record. I think truly that’s why we decided to invite this one into the fold, it helps tell a different perspective of my character and struggle. And it doesn’t hurt that it’s a bit more of an anthemic number versus the rest of the songs showcased on the record.

SRS: So you auditioned and made it to the top 10 in 2010 on America’s Got Talent. How did that experience shape you as an artist?

TM: Well…if I haven’t talked enough already…let’s see if I can sum up the best parts of this experience.

It’s taught me that success isn’t handed to you. It’s taken me over 7 years since then to really find myself as an artist. All the while on the show and a great deal of time afterwards I felt as though brand and connections were the most important when, in fact, it’s not. Success in music, at least to me, has much more to do with the writer you are and the message you have to share which is why this EP is so important to me because I’ve really learned how to carve out those important bits.

It’s also shown me that I’m weirdly comfortable with being alone on a stage in front of 5,000+ people. It was such a dream to have simple conversations with specific people in such a large audience and play music. I never had a moment’s hesitation about the situation and it’s crazy how big a crowded room can look in a picture and then how homey it can feel being there in person.

SRS:  What advice would you give to someone who wants to audition?

TM: To this day, people in Nashville and Los Angeles are still lining up to audition and make their “dream a reality” through the reality contest bubble. I would say audition but focus on your craft as a songwriter because what will make you stand out is your creativity in the music industry not the credit of being on a show. Also, research how many songs each of your favorite acts writes to make up their record, you’ll find it’s typically much more than people will think or be willing to put in the time for. Everyone thinks they’re smarter and that they’re the one that can find the shortcut to success so what you find is what they should be doing they’re not because they think everyone else is already doing it. Don’t spend time being so clever that you don’t show up and do the work. Reality shows are just a pit stop and not the end goal so work and think beyond that.

SRS:  Your fan songwriting tour during the summer of 2016 is probably one of the coolest fan to artist experiences we ever heard. Tell us about it! And would you do it again?

TM: Yes, yes and yes. So fun. It obviously took quite a bit of work and planning but I love designing merch and experiences to make people feel unique and special. I have such a heart and focus on being able to connect words and melodies together so I wanted to be able to share that experience in the living rooms of the people that have supported me so far. I think it helps connect you to your listener and vice versa when they get a grasp on how you approach songs and why they become the way they are. It’s definitely a powerful and unifying experience and I would definitely do it again. I really just love being on the road and hanging out with everyone.

last night i tried to convince myself to not get up and get ice cream four times throughout the night.

it was the hardest night of my life.

Giselle
← Previous Story Exclusive: Our Interview With Laura Pieri
Next Story → Maliabeth Johnson On Her One Woman Show