March is just around the corner, and so is South by Southwest 2014. But before the festival started, we wanted to help you guys get familiar with the faces you will be seeing on stage in Austin, TX.

The lineup this year is crazy, but there was one band that really caught my attention. Ever heard of Bad Veins? The Cincinnati indie-pop duo, originally formed in 2006 by song-writer/composer Benjamin Davis and drummer Sebastien Schultz,and completed by Jake Bonta in 2013 after Schultz quit, will be making its return to the SXSW stage this year on March 12th at the Quantum Lounge (305 W. 5th St.)

The Ohio-based band, who has previously released two full-length albums, Bad Veins (2009) and The Mess We’ve Made (2012) and an EP, Outliers (2010), is in the process of recording their third studio album. Known for sporting vintage military clothing, using a telephone to sing into while performing, and utilizing an old reel-to-reel named Irene (also known as the third band member) for backing tracks, the duo has toured relentlessly and has already performed with multiple bands, including Two Door Cinema Club, Walk the Moon, The Dig, or again We Are Scientists.

The band has very often been praised by big names, including ABC Amplified’s Dan Harris and USA Today, for their stage dynamic and their diverse sound incorporating electro, space rock, new wave, goth, and shoegaze, which is another reason why you should definitively check them out in March at SXSW. And if you’re not in Austin in two weeks, fear not, Bad Veins is heading on their headlining tour, the Turn Around Tour, which will kick off in Atlanta, GA on April 17th. 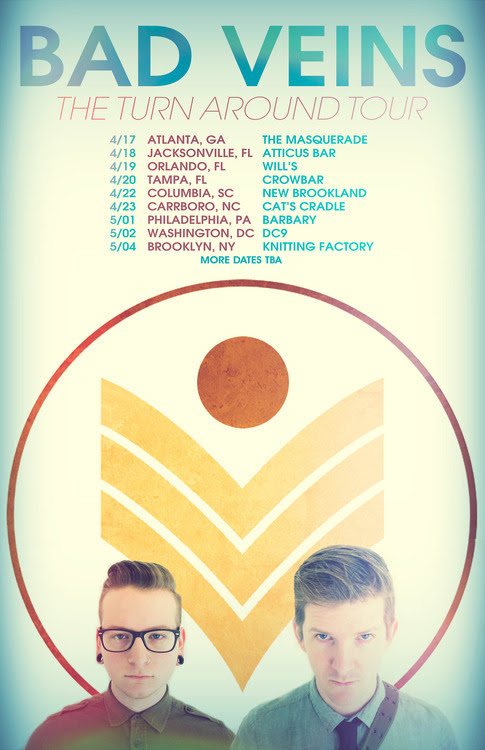 Keep Up With BAD VEINS: