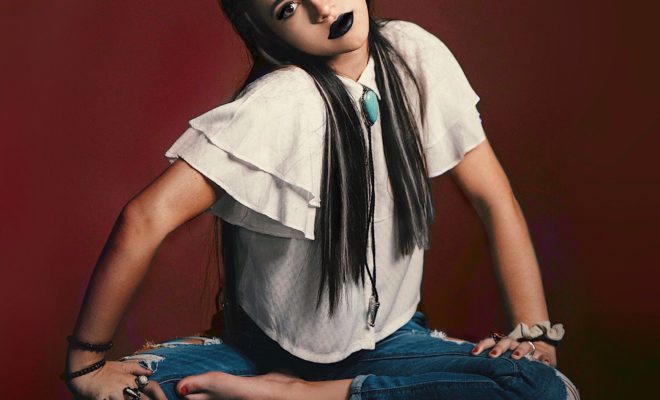 Read Stage Right Secrets‘ exclusive Q&A with Natalie Claro, below.
What went into the creation of your song “Discomposure”?
A concerning amount of blood, sweat, and tears. (Literally). Hours upon hours of tracking drums, getting blisters in my hands and fingers, because I wanted the recordings to be *just* right. Days of redoing vocals out of self critique, knowing I could do better. Crying into my laptop during my 2nd month of editing because it still wasn’t anywhere near my vision. Out of all the songs off “Selfish Topics”, this was definitely the one that beat me up. It was all worth it, it’s now one of my favorites released thus far.
Your music video is eye-catching, how involved were you in the concept?
I actually wrote and directed the video! I wanted the first half to represent the turmoil touched on in the song; the sleepless nights, the uncertainty, the worry. The instrumental section feels like such a climax, that I wanted to use it as our “release” of stress. I’m bursting out of the house and running a beeline to an indie concert, because music has always been my healing, as it is for many people.
[embedyt] https://www.youtube.com/watch?v=GucAcpBxqLc[/embedyt]
Since most of the country was or is in quarantine, what have you been doing to fill the time? (Bing series, learn new skills, etc.)
Nonstop writing, and officially moving across the country to Nashville, Tennessee. Words cannot describe my excitement to convert my studio apartment into a home studio!! My dream since I was a pre-teen has been to wake up every morning in my creative space, and those dreams have come true.
Do you find it easier or harder to be creative at this time?
At first it was a breeze, but now it’s definitely more difficult. As of now, June 12th 2020, I haven’t seen anyone my own age since February. The last time I told someone this they asked if I was okay. The answer is no. I’m definitely losing my mind lol.
Have you recently rediscovered any records or discovered new artists that you’re listening to right now?
YES! I can’t believe it took me so long to get into Hozier… what was I doing? I’m truly an embarrassment, I wish someone would’ve forced his music down my throat when he first emerged. “Wasteland, Baby!” is a masterpiece and I could write a 10 page essay on how magnificent it is.
Taking it back, was there a specific moment that made you realize that you wanted to become a musician?
Absolutely, to this day I credit my realization to Paramore. While music has been the core of my life since I could talk, I rejected every possible encouragement from my mom to pursue it professionally. A career in music honestly didn’t seem feasible. Finally one night in 2014 I was able to see my favorite band in concert, Paramore. I remember having to pick my jaw up off the ground; Hayley Williams bashing her head and running up and down ramps on stage was the most miraculous thing I had ever seen. The next day I told my mom she was right, “that’s what I want to do.”
Do you recall the first album you bought or listened to?
A CD of Jennifer Lopez’s album JLO that my mom gave to me when I was like 8 years old, lol. I thought I was so cool for having that.
I feel like a fossil right now how were CD’s still the only means of music besides radio when I was 8?
What made you get into songwriting?
I weirdly don’t think I ever got “into” songwriting. It’s something I’ve always done, even when it was bizarre little chants in kindergarten. I wrote my song “Shower of Roses” when I was 14 and released it when I was 17.
How did you get involved in production?
The first track I ever released, I paid someone to produce it for me. They really did not have my best interest in mind and the song was ultimately kind of corny. I knew from that moment that it’s essentially a waste to give someone money only to create something that will never be exactly what you want.
I spent an entire summer blasting music into my ears, picking apart every instrument and sound in the music I was listening to. The pros, I was able to learn how to match melodies, chords, beats, and rhythms compliment each other in order to achieve a certain style. The cons is that I permanently broke my brain and can’t listen to music for relaxation unless it’s a song I’ve heard so many times I’m no longer analyzing every layer.
What else can fans expect from you this year?
If I’m being honest, because the music industry has essentially been put on pause until 2021, I’m trying to focus these next few months on discussing the Black Lives Matter movement and other humanitarian issues that are long overdue. The only reason I’m finally releasing this video is because I made it back in January and have been promising it to my audience for months now, it’s time it sees the light of day.
I really think now is the perfect opportunity to make change. This is the first time in my life I’ve seen such major results in such a short time frame from my generation’s fight for equality. I have so many young minds looking up to me, I’d be out of my literal mind not to educate them.
I’ll continue to protest, speak out on injustices, donate, and sign petitions until I’m exhausted. It puts me in so much g*ddamn pain to see innocent people become victims of our system all due to lack of action. I’m not ready to give up until equality is in every facet of this country.
Related ItemsNatalie Claro
Jacklyn