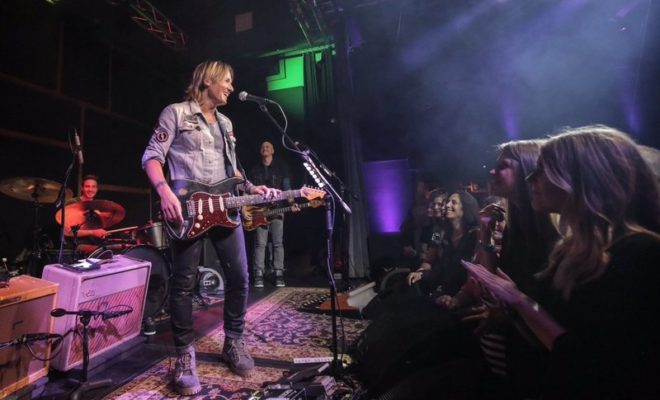 Monday evening (October 16), Keith Urban teased his fans that something big was about to happen at 8 pm. Fans were left wondering what the country singer/songwriter had in store. Many believed that it could’ve been a new song, while others thought he’d be doing another pop-up show like he did a few months back at 12th in Porter in Nashville, TN.

After a couple hours of waiting, Urban revealed the secret, and those who thought they’d be getting a show were right. He teased the show by flipping through records, displaying sticky notes on some, letting the fans know the destination.

Over 100 fans showed up for the free show, ready and waiting to spend a night with the country legend. Once everyone trickled in, Urban finally took the stage, kicking off the show with a cover of “I Hear You Knocking,” amping up the crowd, who sang along to every word.

“I miss playing,” he told the capacity crowd at the intimate. “We’re not touring right now. I miss gigging. So we called… and said, ‘Can we come and plug in?’ And they said, ‘Sure.’” He gigged, and he did it some more, making it a night to remember for everyone who was there. The Grammy-award winning artist played some of his biggest hits including, “Days Go By,” “Blue Ain’t Your Color” and “Long Hot Summer”.

But that’s not all that happened on Monday night. Urban took time to honor the victims who were in Las Vegas that ill-fated night of the shooting. He made to sure to remind the crowd about the beauty and preciousness of life.

“It’s been a crazy month, really. Just insane,” he said to the audience. “And literally while I was driving here tonight, I was talking to a friend of mine who is going out to be a part of  Tom Petty ’s memorial tonight for the family.”

“We were both talking about the fact that we are both just going to be of service and be a part of something tonight,” Keith continued. “And I just wanted to play music so we can remember what it’s like to be alive, to celebrate and to be together and enjoy this beautiful, precious life.”

After honoring the victims, the country superstar continued to play hit after hit into the long hours of the night. Where else will you get a free Keith Urban show? Only in Nashville. Here’s hoping he’ll do it again soon.