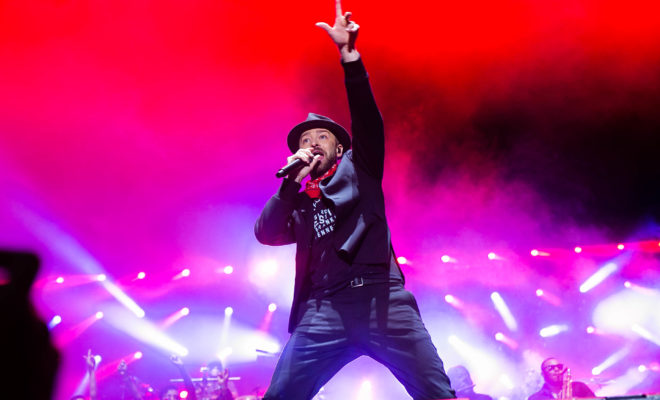 Justin Timberlake took his hometown stage at Franklin, Tennessee’s Pilgrimage Festival Saturday night. Timberlake even made a reference to it saying he “Felt like Dorothy or some shit. But F***, there’s no place like home!”. Only J.T. could have fans waiting at the stage’s barricade since ten in the morning when the festival grounds opened for the superstar’s hometown festival which he was not only headlining but also co-produces.

The superstar kicked off the night with just him and his guitar performing “A Change Is Gonna Come”. J.T. played all of his hits and even put spins on songs like “Can’t Stop The Feeling”.

Timberlake also wanted this night to be special since it was his hometown show, he brought out Chris and Morgane Stapleton for not one but three songs. Timberlake made the remark that anytime either of them played in Tennessee the other should come play. “See what I did there?” he quipped, getting them on stage and asking the question is the way to do it he laughed. Stapleton then replied that he would book his tour only in Tennessee. The trio performed “Tennessee Whiskey”, “Fire Away”, and “Sometimes I Cry” to which Justin told the audience he “fangirled” over, wish he had written “Fire Away” and was making him perform it.

The night didn’t end there, the crowd of thirty thousand belted out every word, even Timberlake was a bit impressed having the crowd sing solo multiple times. Timberlake even busted out “The roof is on fire” at one point. Even though Timberlake is still a superstar, he threw in some “dad jokes” during the night, “I’m a dad now I make dad jokes now.” That dad brought sexy back having the crowd go wild when he yelled “Tennessee is the shit!” The night ended with his hits “Sexyback” and “Mirrors”. We can’t wait to see what next year’s festival brings.

← Previous Story The Brightest Up and Coming Musicians At Pilgrimage Festival Day 1
Next Story → Justin Timberlake Comes Home To Sold Out Pilgrimage Crowd!