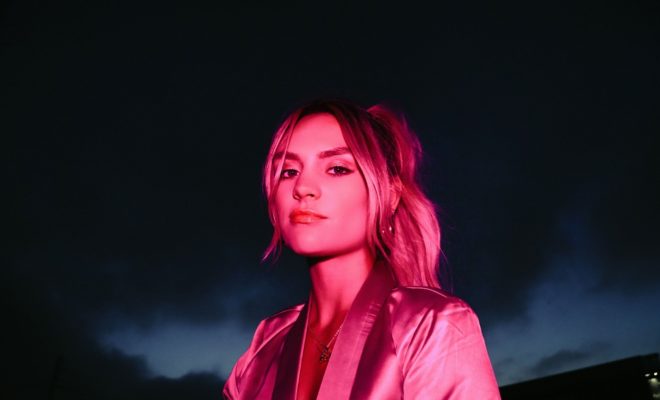 Congrats on Rebound! Do you have a favorite lyric from the song?

Thank you!! Ohh yeah. My favorite lyric is “If I drink a drop of you, I’m gunna want the whole damn bottle” 😉 which comes in the pre-chorus.

Can we expect a music video? What would you like to see in it?

YES! I’m so excited for this video. It’s already been shot, so in the next few weeks you will be able to see it.

Your inspiration came from your real-life crush, has he heard the song?

You know, I don’t know. He still follows me on Instagram so he could have definitely heard it. lol

You wrote the song two years before you released it, what went into the process of creating the track?

I did yeah, which is crazy because I’ve never done something like this before. Another reason why he might not know it’s about him. Haha I had one producer start on it and he just really wasn’t getting the vibe I wanted for the song no matter how many notes I gave him, so I decided to switch to a good friend of mine, Cards, who is also an artist as well. I wanted a really good string section for this song too, so I asked my college tutor from when I went to Berklee College of Music to do the strings for me. He killed it. This just felt like the right time to release the song. This song was my baby, so I wanted to make sure it was right.

Your sound has evolved quite a bit in the past year, what influenced the change?

I think my own personal growth and life experiences have influenced some change in my sound. Also, the new producers I’ve been working have influenced that. I always wanted to go a little left field from straight pop and find my niche, which was incorporating rock and RnB styles into my music. I’m really excited for this new chapter.

You posted on social media that last month was one of the toughest times for you, what did you do to get out of that?

I honestly just spent a lot of time alone. It really helped me build mental strength. I’ve always been someone who wants to be around people all the time and it got really exhausting and draining for me. I was always worrying about what my friends were going to think if I said no, but then I realized that if they really cared, they aren’t my friends you know? It was a lot of self-growth, finding happiness again and inspiration. I’m super happy that I’m out of that now and just ready to work!!

We saw your GLAAD video to promote anti-bullying, what made you so passionate about that?

Aw that’s crazy! GLAAD partnered with Tik Tok for National Coming Out Day and I ended up on the discover page on Tik Tok somehow. That was really cool because a lot of people got to see my video. But as a kid growing up I was bullied, for honestly the stupidest things. Kids just being jealous of other kids, trying to put them down to make themselves feel better and it’s just not right. It’s mean. I know there’s a lot of other young and old people that get bullied daily for how they look, how they dress, who they identify with, etc. so I wanted to show my support to the LGBTQ community in sharing a video expressing acceptance. It’s crazy that it was seen by almost 30,000 people. Hopefully, it made a small difference!

What else should fans be on the look for?

I’m currently working on a lottt of new music for my first EP. You can follow me on Instagram, Twitter and FB @jennymarchmusic to keep up to date on when I’ll be releasing my next songs. (: I’ll also be performing around LA so if you live in the area, come see me!