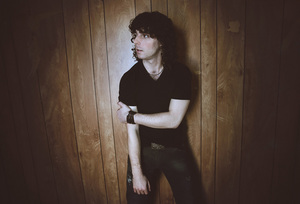 Josh Taerk is an artist many of us in the U.S aren’t familiar with. The 25 year old has already made his mark in Europe and his native Canada, but now he’s ready to bring his unique way of artistry to America.

Growing up, Josh remembers being surrounded by music, mostly due to the fact that his parents would constantly be playing their old records around the house. As a teenager, Josh had a friend who rocked the classic big hair and rocker t-shirt look, while he on the other hand was more into the boy-band scene. Having completely different musical tastes caused for some friendly banter between the boys, but Josh says it was that very friend that made him realize music was his calling.

After inviting Josh to a friend’s party, the long-haired classic rock loving friend said there would be a live band in attendance, so of course some Josh cracked a few jokes with his buddy. “I get to the party and I’m talking with a group of my friends, all of a sudden the band launches into “Shook Me All Night Long” by ACDC. I was hooked… I came home that night and told myself, “I’m going to play guitar in a rock band.”

Although becoming “the next Slash” was always in the cards For Josh, learning how to sing was never on his agenda. Until one summer, he spent time as a camp counselor and would whip out the six-string during his breaks just to pass the time.

As Josh began strumming the chords, ‘Wonderwall’ by Oasis began to fill the ears of his friends surrounding him. The tune caught the attention of a female counselor who posed an interesting challenge to Josh.“…your going to have to start the song over and sing it this time or I won’t be able to follow along.” Josh hesitantly grants the girl her wish and starts the song over.

“When I was done, everyone just stared at me for a solid minute, my heart was pounding out of my chest, and then finally she looked at me and said, “you didn’t tell me you were a singer.” I’ve never looked back since.” Josh says.

These days, Josh has steered away from the hard rock lifestyle, and has shifted his influences more towards classic rock. When it comes to writing music, Josh looks to none other than Bruce Springsteen for inspiration.

“His writing is also so emotionally charged because it comes from a vey real place, he tells stories about his experiences growing up and living life; and because his stories are so attached to his experiences people can feel his music even if they can’t relate directly to the experience he’s describing.”

Springsteen’s “storytelling” way of writing and performing is quite similar to the way Josh says he writes and performs his own music, “When I write a song, I want people to be able to take my stories and apply them to their own lives and experiences,” Josh says. “Storytelling is the combination of the story and the way it’s told, you can’t have a full story with one and not the other.”

When it came time to discover himself as an artist, Josh took a very organic approach. “…for the longest time I was my only accompaniment, and I still wanted to paint a fuller picture of my stories for people,” Josh says. “My singing voice has always had a deep powerful quality to it and I’ve put a lot of time in as far as honing that sound and harnessing that power through lessons and coaching.”

Although the creative process of writing songs is very important when it comes to creating your song, Josh points out hat it’s not just about the kind of songs you sing, but how you get the message across.

“Performing live also showed me that adding emotional depth into your songs doesn’t stop at the songwriting stage,” Josh says. “When I sing I want my voice to match the emotional intensity and depth of that moment in the song.”

For fans that have never heard of Josh Taerk before now, he wants you to know he’s completely dedicated to giving his all on and off stage, “ Without listeners, new and seasoned, I wouldn’t have the awesome pleasure of getting onstage every night and performing songs off of albums that I get to write, envision and bring to life with my team.

Give Josh a listen on Spotify!