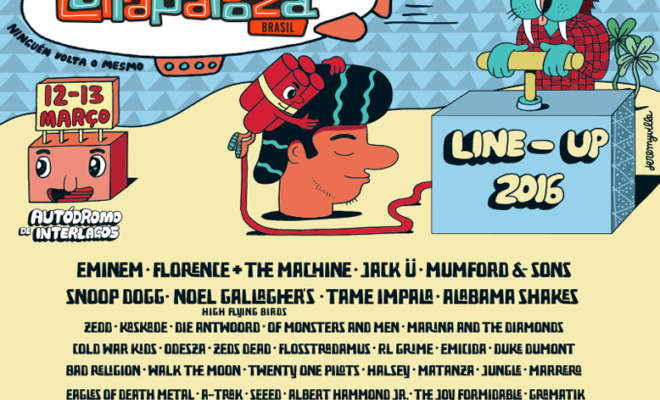 Lollapalooza Brasil, Lollapalooza Chile and Lollapalooza Argentina return in March 2016 with stellar lineups featuring headliners Eminem, Florence + The Machine, Jack ü (Skrillex + Diplo) and Mumford & Sons, along with Noel Gallagher’s High Flying Birds, Snoop Dogg, Tame Impala, Alabama Shakes, Zedd, Kaskade, Die Antwoord, Of Monsters and Men, Twenty One Pilots, Marina and the Diamonds and many more.
Both Eminem and Florence + The Machine will make their first ever appearances in Chile and Argentina, and this performance will be only the second time these artists have played in Brazil. Fans will have their first experience with Mumford & Sons, who have never performed in South America before, and Skrillex and Diplo will return together as Jack ü, following spectacular sets last year. Albert Hammond Jr., Alabama Shakes, Of Monsters and Men, Walk the Moon, Twenty One Pilots and Halsey join the bill following hot live performances at Lollapalooza Chicago this summer, and Tame Impala and Skrillex (with side project Dog Blood) are making the global rounds with sets at both Lollapalooza Chicago and Lollapalooza Berlin earlier this year.
Lollapalooza South America – March 2016
Related ItemsdiploeminemKaskadeLollapaloozamumford and sonsnoel gallagherOf Monsters and Menskrillextwenty one pilotszedd
Jacklyn