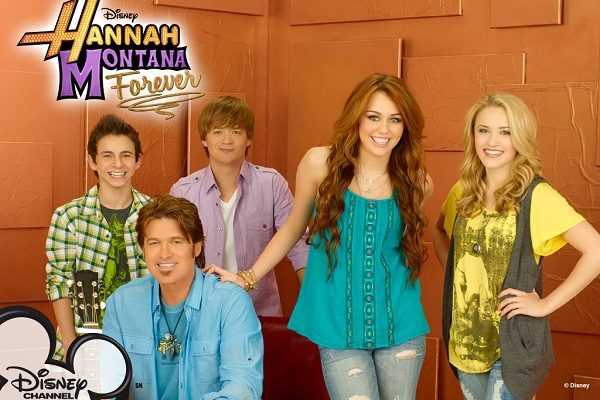 Hannah Montana’s 10th Anniversary: Where Are They Now?

The Cheetah Girls, Camp Rock, High School Musical, Hannah Montana, I was one of those kids who grew up with the second generation of Disney, and it’s hard to believe some of those shows/movies are turning 10 YEARS OLD this year!

Following the HSM 10 Years Special, during which we got updates from the whole cast, we figured we’d give you updates from the cast of the other show that’s turning 10 years old today, Hannah Montana.

Since Hannah Montana, Miley Cyrus has kept making headlines. After So Undercover (2012), Miley had put acting aside to focus on music, releasing her latest album Miley Cyrus & Her Dead Petz and serving as key adviser to Christina Aguilera on The Voice. She most recently returned to acting as a guest star in The Night Before. Aside from her career, Miley also created the Happy Hippie Foundation, aiming to fight injustice facing homeless youth, LGBTQ youth and more.

Emily Osment literally hasn’t stopped even just a minute since her Hannah Montana days. Her performance in Freeform’s Cyberbully (2011) was  highly acclaimed and her success kept growing from there. In between two seasons of her hit show Young & Hungry, Emily also starred in Love Is All You Need, an upcoming feature film set in a world where gay is straight and straight is gay. Looks like there’s no stopping her now!

Though more quietly than Emily Osment, Mitchel Musso also never stopped acting. He jumped from Hannah Montana to Pair Of Kings, to a couple of thriller movies, Sins Of Our Youth (2014) and The Sand (2015). Mitchel most recently played the lead role in Characterz, and shot the music video for his song “Deadman Walking”.

These moments are real the motive is now. The real trophy goes to Joe for hanging of the 7th floor to shoot it ⚠️⚠️⚠️ pic.twitter.com/28Hn6L20qD

As for Miley Stewart’s big brother, he has been rather quiet since 2006. After Hannah Montana, Jason moved from Disney to Disney XD, where he portrayed Rudy Gillespie in the series Kickin’ It up until last year.

Little Rico is all grown-up! Soon-to-be 22-year-old Moises Arias never quit acting, and starred in about two movies every year since the end of Hannah Montana. He also tried his hand at directing, producing and editing with the short movie he wrote, Brothers In Arms (2012). And it looks like 2016 is starting well for him, for he is already set to play in The Land, Ben-Hur, Little Bitches and Blast Beast. Busy Moises!

Oh Jake Ryan, do I miss thee! Cody Linley has been as busy as his former cast mates. Following Hannah Montana, he played in The Playroom (2012), My Dog The Champion (2013) and more recently portrayed the main protagonist in a movie based on a true story, Hoovey. Cody has just finished filming his new project, Sharknado.

Billy Ray Cyrus has been doing a lot of music since the end of his on-and-off daughter’s show, as both a solo artist and as a member of former supergroup Brother Clyde. TV-wise, Billy Ray starred in a few movies, like Christmas Comes Home to Canaan and Sharknado 2. Now, Billy Ray is awaiting the premiere of his new movie, Still The King.

Getting so excited for #StillTheKing premiere Sun June 12 on @CMT!! Down to some final edits & finishing touches. pic.twitter.com/8upcsmdZqb

The cousin of Beyoncé has been quietly making a name for herself, guest starring in series such as Awkward and Melissa & Joey. She also most recently starred in Megachurch Murder (2015). Meanwhile, Shanica has also made her voice heard. You’ll indeed be able to hear her in rapper Jon Connor’s upcoming album later this year.

It’s official! Look out for me on @jonconnormusic album! I’m so proud of you Jon! #AfterMath #AboutLastNight 🎶 pic.twitter.com/vQGUA2DQnt

Long gone is Ashley Dewitt, the popular mean girl! After the end of the Disney Channel series, Anna Maria killed it in the Godspell revival on Broadway in New York City, for which she was voted “Best Featured Female Artist in a Musical” at the 2012 Broadway World Awards. She then guest starred on ABC family’s hit TV series Baby Daddy as “Jenna”, while she also worked on her music career, performing for former first lady Mrs. Nancy Reagan at the Ronald Reagan Centennial Birthday Celebration. Lastly, she launched her very own beauty and lifestyle Youtube Channel.

So Facebook HQ was one of the coolest working environments to visit. Vlog coming soon! 👍🏻 pic.twitter.com/aGOsHTJIKF

After Hannah Montana, Drew Roy played in a couple of short movies before landing the role of Hal Mason in Falling Skies. Most recently, Drew portrayed Miles West in the movie Sugar Mountain and tied the knot with his long-time girlfriend! Congrats Drew!

Huge thank you to @lynettie13 for sending me the Hal jacket I bled, sweat&cried in for 5 season of #FallingSkies!! pic.twitter.com/ciqJED1x3C