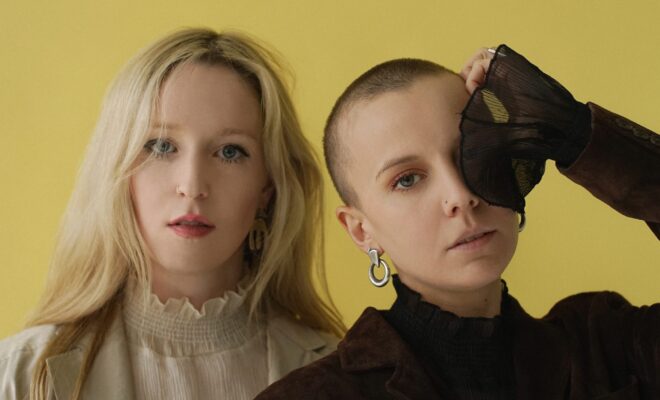 Stage Right Secrets caught up with Gracie and Rachel to chat about their sophomore album, life in quarantine, and so much more. Read our exclusive Q&A, below.

Congrats on your album! This is your sophomore record, how did the creative process differ this time?

G: Thank you! We’re grateful to have this music out in the world. The creative process this time around was certainly an evolution from the last as far as how as how much we were involved in production elements and also how we wrote together at the onset of creating songs more collaboratively. We really went in with the intention to write every day for a concentrated period of time, which is something we had never really done before. Showing up to write every day meant we had to get comfortable with coming up with ideas on the spot, whereas for the last body of work the songs were often created more privately before being brought to one another. It really forced us to get more comfortable with coming up with ideas that we didn’t necessarily think were worth exploring and trying them out anyway.

R: I’d say there was also an evolution in how we expanded the use of our instruments. I think we used to be much more simplified as a violin, piano, vocal duo, sometimes augmented with a percussion element. But this time we wanted to find ways to use our instruments to make different sounds than we’re used to them making, and also to take a step back and not always feel the need to fill every moment of a song with our instruments, but to allow for the space, and sometimes the silence, to guide us.

How did you go about creating the track order?

G: We wanted to create an arc in the record that illustrated the experience of someone learning to trust themselves to lean into their doubts, their fears, their weaknesses, and we didn’t want some of those lessons to come too early on, so we made sure to position songs that were a little more unsure of themselves lyrically earlier in the record and have some of the more confident statement pieces come later on.

Was there a song that didn’t make the cut that you would have liked to see make it?

G: Most definitely. The making of this record included a lot of killing of our darlings and it was really emotional for me because I get attached to songs like their extensions of myself, so to not have some of them move forward to the inclusion of a record can feel like leaving a limb behind. There’s a song called Patience that really helped me get through a time of… Being impatient.

Do you think that the location (your home studio) played a part in the overall vibe of the record?

G: Absolutely! We really feel that a lot of this record is about communication, both within ourselves and with one another. And a lot of that definitely comes from our over-involved, working-living relationship, where we’re confronted with our ways of doing or not doing things 24/7. Rachel has taught me so much about being patient and letting things roll off the shoulders when I have a tendency to obsess or lament over a situation. I think this record became a guiding force for us in our insular situation to lean into our weaknesses and turn them into strengths.

R: We can both pick up a little more of what the other is putting down, and seeing that in our living/working space is what helped drive us to write this body of work.

You both co-wrote and co-produced all of the songs, how did you each get into songwriting and production?

G: I got into songwriting at a young age when I realized that I wanted some of the Bach pieces I was playing to go in a different direction. Don’t get me wrong, Bach is incredible, I just remember taking a Sonata I was working on and using the notes in the piece to create something new and being really grateful that. At around 14 a family friend of mine took his own life and I was moved to write a song about that, and that’s when I realized that songwriting was my catharsis.

R: I got into production as a result of being disappointed by other producers we were working with not delivering the messages I was hearing in my head the way I wanted them to be. I really started using Ableton as a tool for our live show, but then became much more curious about how to really utilize it as a writing tool, creating tracks and expanding sonic worlds there. Being able to produce our own demos has given us a lot more freedom to explore ideas, and it’s allowed me to come up with a world sounds I can’t always come up with around an instrument.

How did the album artwork come about?

G: We wanted to show two people, both supporting and leaning on one another, in an effort to illustrate the varying ways that the title Hello Weakness, You Make Me Strong can take on. There’s a level of trust there with the opposition of bodies. I think in the cover art image I represent the person that needs to trust themselves to carry on, and Rachel is representing the person who needs to trust someone else. I often take on what Rachel’s representing in this image and vice versa with her to me, but I think what it hopefully is doing is illustrating how vulnerability in differing scenarios can give you strength.

Since most of the world is or was in quarantine what have you done to pass the time?

R: Making new tracks! And creating music videos. And doing puzzles. And cooking, lots of cooking. But mostly staying creative as much as we can.

Did you find it easier or harder to be creative?

R: Honestly, it doesn’t feel very different for us. We’ve been in a chosen isolation for so long writing and recording this record, so to have this time now just really feels like an extension of where we’ve been.

What do you do to overcome a creative block?

G: My new mantra has become, “Write ugly, edit pretty,” and I came up with it when I was having a really hard time creating something I liked. I think it’s easy to have a tendency to abandon something when it doesn’t look or sound the way you want it to at its inception, but I’ve found that throwing things onto the page with abandon and without scrutiny, with the understanding you’ll come back to it later to craft it to be what you want, can be a really helpful thing for pushing yourself past a block and getting interesting things out of you.

What do you think the future of the music industry will hold?

R: What a question! We certainly don’t have the answers but we’re hopeful there will be a new wave of art and support for the arts that comes out of this time.