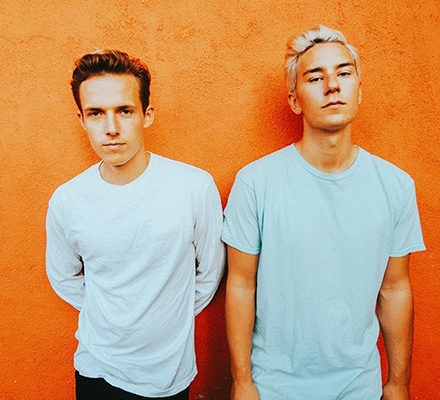 Geffen Records is proud to announce their first release from newly signed German duo BUNT.  “Oh My Other” is their debut single.

BUNT. is a multi-instrumentalist duo from Stuttgart, Germany comprised of Nicolas Crispin (23) and Levi Wijk (23). Their sound is a combination of genres comprised of Folk, Americana, Soul and Pop. ‘BUNT’ – which means ‘colorful’ in German –  has 50 Million + streams to date and has become one of the most successful and streamed artists from their hometown in Germany.

In 2016 BUNT. was selected to co-star alongside Nathaniel Rateliff & The Night Sweats, as well as produce the music bed, for the Kia Motorsport ‘Soul’ campaign following their critically acclaimed  single“Old Guitar.” “Old Guitar” reached # 4 on the US Viral chart and #8 on the Global viral Spotify. Since the release of the Kia commercial, BUNT. began releasing their mixtape series “Folk-House Chapters”featuring remixes of popular songs from artists including Vance Joy, Mumford & Sons, Lumineers, Elle King and more.  These chapters have gained the attention and support of the major YouTube channelProximity which has since hosted all 5 parts of the series to date.

BUNT.’s official remixes for OneRepublic’s song “Let’s Hurt Tonight”, Avicii’s “Without You”, Gryffin’s “Nobody Compares To You” and Spanish singer Alvaro Soler’s song “El Mismo Sol” have performed well, charting in several global markets. Their remix of “El Mismo Sol” hit the #1 slot on the Spotify Viral Chart in Spain upon release.  BUNT. will release their first full length album on Geffen Records this summer