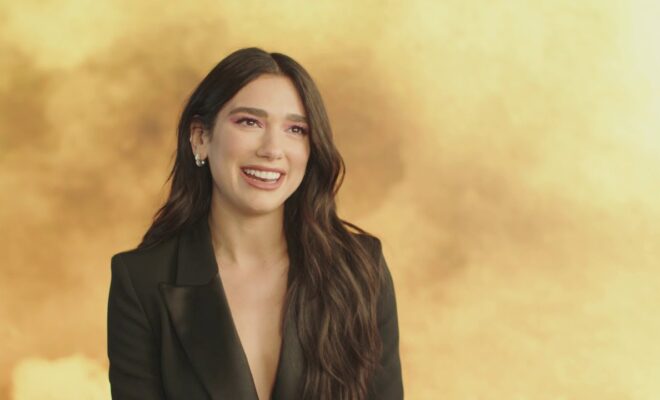 Dua Lipa sat down backstage at the 2021 Grammys to chat about her whirlwind year.

Dua Lipa is nominated for an impressive six awards this year. “It’s mind-blowing,” she began. “I mean it’s just crazy and I’m so so grateful for the response for this album and for the music. I’m really really proud of this record. I just feel so proud and so grateful. It’s just been so surreal.” As for her performance, she said that fans can expect drama, dancing, and fun.

The “Levitating” singer spoke about the importance of music during this past year. “I think music has definitely been something that has carried all of us through this time,” she said. For Lipa, the music was an escape for her. “When putting it out I was hoping that that’s what what people would feel during this time that it could just get you away from anything that was going on. I feel like I’ve done exactly the same when I turn to different artists and musicians that I like. I think music has been quite vital this year.”

During the past year I’ve learned a lot about patience and confidence and thinking outside the box. And coming up with interesting ideas from
my sofa. Lipa revealed that she would set up green screens in her living room to do virtual performances and media interviews.  “[I’m] still trying to create things that are fun. I feel like it’s resilience as well you know just to push through and keep going,” she concluded.