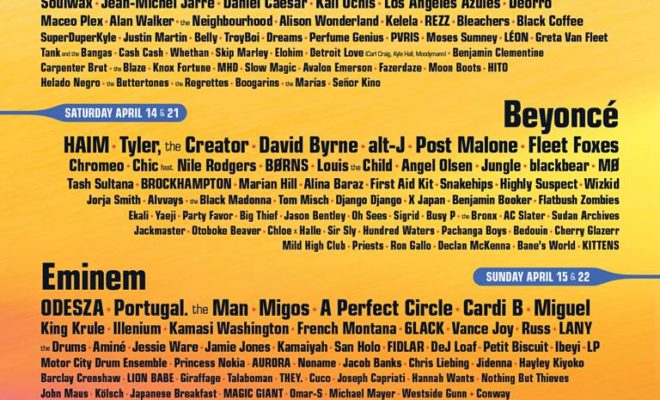 Day 1 of Coachella was completely filled with surprises and mind boggling performances. Here’s some of our favorite moments from Day 1, Weekend 1. Be sure to subscribe to us on Issuu for our Coachella content in our next issue!

4. Bleachers’ set was beyond entergetic and passionate. Hearing the crowd singing “Rollercoaster” was a can’t miss moment. Jack Antonoff brought out Carly Rae Jepsen for “Hate That You Know Me” and “Alfie’s Song”. The crowd roared when Jack claimed her his queen of pop.

6. Kygo’s set brought a slew of special guests including: Ryan Tedder (OneRepublic) performing “Stranger Things”, Rita Ora filling in for Selena Gomez’s part in “It Ain’t Me”, Jamie Foxx for “Sexual Healing, and Julia Michaels for “Carry Me”.

8. During The Weeknd’s set the most notable moment was Abel holding back tears during his performance of Privilege.