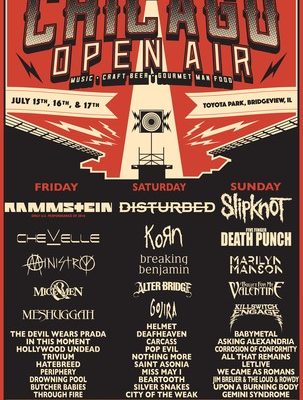 In addition to the over 40 bands performing at this year’s first annual Chicago Open Air festival at Toyota Park, pre- and after-show events, food, beer, and more have just been announced for the festival agenda. Here’s the rundown of what to expect, including food, beer, mini-golf, and more!

Pre-Party: 95 WIIL Rock and 100.7 QRock will be presenting the Chicago Open Air Pre-Party at Concord Musical Hall on Thursday July 14. The lineup includes headliner Otep along with Shaman’s Harvest, Islander, and Through Fire. Festival ticket holders can purchase discount advanced tickets. For tickets to the event, click here.

Inaugural Kickoff Dinner: The celebratory dinner in honor of the fest’s first year will be presented by Chicago’s Goose and Fox, hosted by Jose Mangin of SiriusXM. The BYOB dinner is a five course meal with seasonal and local ingredients from the Midwest and costs $75. Tickets are extremely limited, and can be found here.

#GourmetManFood: Despite its title, Chicago Open Air’s website states that “Gourmet Man Food” is “not just for men.” Instead, the food is hearty and delicious without skimping on portions. Vendors and selections include the following:

Jack Daniel’s Experience: The “Taste of Tennessee” gives fans 21 and older a chance to experience the nation’s oldest registered distillery from outside of the Jack Daniel’s Hollow, seeing the charcoal and oak barrel aging process that Jack Daniel’s uses in creating their whiskey

The Music Experience: This interactive experience allows fans to get up close and personal with professional music equipment used by touring bands today and allows them to see just how much goes into performing in a professional setting. Autograph signings and other band interactions will be available throughout the weekend.

f.y.e. Fan Experience: f.y.e. will be providing the ultimate fan experience throughout the weekend with music from the weekend’s lineup as well as the chance to meet many of the festival’s bands.

Dyin 2 Live / Fxck Cancer: The FC Cancer Foundation seeks to fight cancer through early detection and increased awareness in an effort to eliminate late-stage cancer diagnoses. The Dyin 2 Live wish-granting program gives cancer patients the chance to forget about their struggles for a day and live out their dreams.

Take Me Home Animal Rescue: This non-profit, volunteer-based foundation works to provide healthcare and other services to animals in low-income areas. The booth will feature apparel, signed merchandise, and raffles. 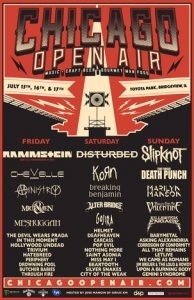 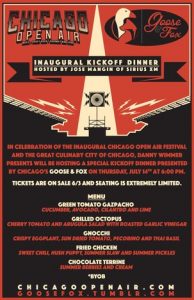